It’s more than a little ironic that Rebecca Sullivan discovered her jazz calling in Russia. Remember, not so long ago, when jazz and other American music were banned there? But the Cold War was long over in 2004, when she spent a semester abroad studying Russian literature in St. Petersburg. Jazz clubs abounded there. And she could get into them, free of the drinking-age restriction that kept her out of nightclubs in her college town of Portland, Oregon. Hearing the music performed live was a revelation. “I had no idea songs could sound like that,” she said.

Jazz CDs, which once had to be smuggled into Russia, were now plentiful and cheap. A self- taught guitarist who had performed folk music on open-mic nights at coffeehouses back home and who was obsessed with Bob Dylan, Sullivan immersed herself in recordings by Billie Holiday, Dinah Washington, and Carmen McRae. Back home, it wasn’t long before she was studying jazz singing, performing at college music showcases and pursuing her own career as a jazz vocalist.

You can hear Holiday’s inflections on Sullivan’s intoxicating debut album, This Way, This Time. But with her girlish sophistication, gleaming intelligence, and three-octave range (she modestly says she only uses two-and-a-half of it), the Pennsylvania native is at 29 already a full blown original—someone who stands apart from all the standards singers now crowding the field not only with her distinctive style, but also her eagerness to take risks. Featured here in a duo with innovative Chicago guitarist Mike Allemana, she mixes affecting interpretations of infrequently heard standards by Frank Loesser, Johnny Mandel, and Hoagy Carmichael with boldly personal versions of songs by the Beach Boys, Nick Drake, and St. Vincent.

Genre-bending is hardly new to jazz, which has seen countless jazz singers dabble in pop and folk since Cassandra Wilson covered the Monkees, Joni Mitchell, and Robert Johnson in the early ’90s. But Sullivan’s combination of new-school smarts and old-school emotion is something special. “Rebecca really gets inside the lyric,” said Allemana. “Unlike many young singers, she never manipulates the melody or takes it out of context. She knows the composer wrote it that way for a reason.”

Growing up in York, Pa., not far from the state capital of Harrisburg, Sullivan participated in several music traditions. She sang with her mother, “just for fun,” in her family’s a cappella gospel group (her grandmother hosted a Bible radio show in the North Carolina Appalachians, where her grandfather was a Mennonite preacher). As a pianist, she won classical competitions and learned American standards from the 1940s and ’50s from old songbooks. (Her father, a doctor, played “a little” trumpet. Her younger brother, a star hockey goalie at the University of Maine, played a lot of saxophone and violin.)

After graduating from Reed College, Sullivan returned to Russia to volunteer in an AIDS clinic. She moved to Chicago in 2006 to study at the Bloom School of Jazz, where her teachers included encyclopedic cabaret star Spider Saloff. When she began attending tenor saxophone legend Von Freeman’s celebrated weekly jam session at the New Apartment Lounge, her bottomless knowledge of tunes made a strong impression on Allemana, Freeman’s guitarist and right- hand man. “It’s so refreshing to find a young singer who knows these beautiful old songs,” he said. “You just don't find that very often.”

“One night,” said Allemana, “she sang ‘This Is Always,’ one of Von’s favorite ballads, and it was

so beautiful and deep, he went, ‘Whoa!’ She had everyone in the band shaking their head. How did this young woman have this kind of feeling already?”

It was only a matter of time before Sullivan quit her day job as editorial assistant at the University of Chicago Press and devoted herself to singing. “The funny thing is, I really had no idea you could be a jazz singer and get paid for it, get paid for singing jazz tunes,” she said. “Then a singer I knew asked me to sub for her at a restaurant and I got paid $80 for four hours! When I worked up the nerve to ask Mike if he would do a gig with me, I really felt like I was in over my head. But he said yes, it worked pretty well, and we ended up doing more gigs and eventually recording the album together.”

Having performed with Allemana, she was comfortable with him in the studio—but only to a point. “Mike likes to do all kinds of unexpected things, like suddenly changing keys or coming up with crazy melodies and rhythms that are impossible to sing. I mean, he writes things that are so hard! But I’m a much better musician after working with him.”

All kinds of fruitful surprises emerged from recording This Way, This Time. The disarming introduction to Johnny Mandel and Dave Frishberg’s romantic “You Are There” derives from Sullivan’s playing around with the intro as a warm-up and the decision to make that part of the recording. “Wouldn’t It Be Nice,” one of Brian Wilson’s best-loved Beach Boys hits, has a kaleidoscopic changeability. Allemana arranged it in three with minor-key accents. Sullivan opens with a kind of free-association scat, renders the lyric in friendly conversational fashion, playfully flattens the melody, and then draws it out over Allemana’s flamenco-intense strumming.

And then there’s the sweet, floating title original, with words by Sullivan and music by Allemana. On impulse, Allemana wrote a three-part harmony interlude that Sullivan sings as a background to an improvised wordless lead vocal, lending “This Way, This Time” eerie warmth. She shifts gears in the middle, putting a charge into the melody. With her ability to hit radiant, bell-toned, vibrato-rich notes up high (recalling ’60s Windy City star Minnie Riperton of Rotary Connection) and plumb the bottom part of her range for adult emotion, Sullivan has the natural chops to go any which way at any moment.

Succumbing to her cool emotion and dreamy phrasing on Frank Loesser’s “Strange Enchantment,” written with German composer Friedrich Hollaender and introduced by Dorothy Lamour in the 1939 film Man About Town, you may find it difficult to understand Sullivan’s early dislike for Billie Holiday. “Whenever my mother put on a tape by her, I would shout, ‘Turn it off! That’s terrible!’” she said with a laugh. “As a kid, I just didn’t like the sound of her voice.” When she first sang in public, Sullivan didn’t much like the sound of her own voice. “I was so nervous that my voice would shake,” she said, “but I loved doing it so much, I overcame that.”

Retaining that early passion for singing, she has only begun stretching her musical sensibility. She plans to begin writing and recording more of her own songs—the fetching “Some Kind of Love” is her first such effort—and recording with her full band. There’s never any “down” time in her musical education. She recently took an ethnomusicology graduate seminar at the University of Chicago and wrote a final research paper on representation of the Other in opera, as exemplified by the blue-skinned Ethiopians in Aida and green-skinned Moors in The Magic Flute at Chicago’s Lyric Opera. “I still feel like I have to be studying something or I’ll stagnate,” she said. Opera fans, as well as jazz fans, should be prepared for anything. Show less

Chicago Vocalist Rebecca Sullivan Debuts With "This Way, This Time,"... 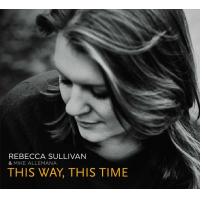 This Way, This Time

All About Jazz musician pages are maintained by musicians, publicists and trusted members like you. Interested? Tell us why you would like to improve the Rebecca Sullivan musician page.