. His new album, Absolute Reality, is featuring some of the greatest names in jazz, like Bob Mintzer, Randy Brecker, Victor Bailey, Lenny White, Dean Brown, the late Ricky Lawson, Ray Obiedo, Larry Kimpel, Walfredo Reyes,Jr, Karl Perazzo, Peter Michael Escovedo, and others. All original compositions, the music fuses a variety of elements from hard hitting funk jazz with horns, to pieces with latin and straight ahead jazz influences, along with some beautiful mid tempo tunes and ballads, even a solo piano performance to close the album with. The sound represents the musical diversity of the Bay Area along with the influences of years of touring and recording with some of the greats in jazz and beyond.

”Peter's brand of piano soul is light, accessible and glistening with chrome-plated funk chord changes.” (Gavin, 1995) ”The Hungarian-born keyboardist demonstrates a flair for appealing hooks.” (Jazz Times / Oct. 1995) ”Honest-to-goodness contemporary cool with a sprinkle of straight ahead elan for a varied diet at the jazz table... He effortlessly communicates to listeners.” (JAZZIZ / Dec. 1995) ”This is a band (Peter Horvath Group with Randy Brecker) to be reckoned with” (Time Out London) 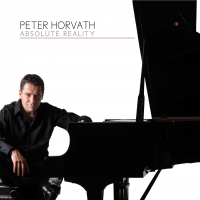 All About Jazz musician pages are maintained by musicians, publicists and trusted members like you. Interested? Tell us why you would like to improve the Peter Horvath musician page.