He subsequently began his career as a solo singer, when in 1970, the song 'A los que hirió el amor', went to number one on the top sellers charts. Inmediately following this record, Pedro Ample (his true name) chose Ruy-Blas as his new stage name, in honor of probably the best theatrical work of the immortal french writer, Victor Hugo.

Between 1970 and 1974, he recorded a few albums some of which were censured because they were considered 'politically incorrect' at the time (this was during the dictatorship of Franco). In the year 1975 Pedro recorded for Polydor his first record as a composer and producer, it was entitled ' Luna llena' (Full Moon) and this recording brought together a group of young musicians (Jorge Pardo, Tomas San Miguel, Jose Antonio Galicia, etc), who today are outstanding artists in their own right that also record in the US for the label Miami Records.

One year later, he recorded an album entitled 'Dolores'. On this particular session, Pedro assumed the chair of composer, singer and drummer. Very shortly after, he formed the group that would call themselves by the same name as the previous record. This is how the band 'Dolores', was born, which would mark new horizons for the state of Jazz-Rock (Fussion) in Spain. The next record, 'La Puerta Abierta' (The Open Door) also produced by Pedro, took the group to the stages of the International Jazz Festivals of San Sebastian, Guetxo and Vitoria in 1977, Musically this is what would eventually become the meeting with Paco de Lucía, and later with Camarón de la Isla.

This same group recorded another album entitled 'Asa-Nisi-Masa' which has been released in several different countries, with a lot of success, especially in England and Japan.

Near the end of year 1979 , Pedro Ruy-Blas left the band 'Dolores' in order to further pursue his solo career as a singer and composer. From that point on, he began to work with some of the most important musicians of that time, forming the superband 'Puente Aéreo' that featured some of the best musicians from Madrid and Barcelona.

In 1984 he released a new project entitled 'Madre Ciudad', wich he produced himself for the independent label Nuevos Medios.

That same year, he began a new facet of his career in the realm of Musical Theatre, interpreting the part of Judas Iscariote in Andrew Lloyd Weber's rock- opera, 'Jesus Christ Superstar', in the theatre Alcalá Palace in Madrid, It was directed by Jaime Azpilicueta.

In 1990 he began preparing for the lead role in 'Les Miserables', which ended up being an amazing success. This was directed by Ken Caswell (stage direction) and David White (musical director) both from England.

In this role interpreting Jean Valjean , Pedro would by the end, do a staggering total of 564 shows!. He would also record the firs version this theatrical work, sung totally in Spanish, to be released around the world. In the webpages of 'Les Mis', Ruy-Blas is considered to have done the best interpretation of this role in non-english version.

In 1992 he was recognized by the national television program 'Jazz entre amigos' (Jazz Between Friends) when he and his group were presented with the award as best jazz group of the year. After finishing his work in 'Les Miserables', in 1995, Pedro will once again take part in another very important Musical, this time sharing the stage with Ana Belen, with Pedro taking the part of ' Menelao', in 'La Bella Helena', an adaptation of the Offenbach's opera, and it was under the direction of Jose Carlos Plaza and Mariano Diaz, its first performance formed a part of the Classical Theatre Festival of Mérida. It was performed later in the Teatro Albéniz in Madrid, and in many different cities throughout Spain.

In the middle of 1996, Pedro Ruy-Blas won the role of the inmortal spanish painter, Francisco de Goya, in the Musical 'La Maja de Goya' which was written by Vicente Escrivá and Fernando Arbex. It was directed by Vicente Fuentes, and it ended up being a huge success for both the audience and the critics. Because of this success, he ended up recording a CD of 'La Maja de Goya' with the London Philarmonic Orchestra.

In this same year, he also would work under the direction and production of Luis Ramírez in the first showing in Madrid of 'La Magia de Broadway' (The Magic of Brodway) in the Teatro Lara.

El 1999 he recorded his new album; 'Teatro, Circo y Variedades', in wich he interpreted his own songs with the help of Ana Belén one of them (Batúque Bebé)

He recorded the song 'La Mirada Celestial' (Through Heaven's Eyes) for the first Dreamworks animated feature film 'The Prince of Egypt '.

In 2000 he was the lead in the musical anthology called 'Memory'. A tour of this play went throughout all of Spain and was in the Teatro Alcázar in Madrid for many months.

In 2001 he recorded the song 'Mundo Perfecto' (Perfect World) featuring the music of Sting for the spanish version of the Disney film “The Emperor's New Groove “.

In May 6th of 2003, the new record of Pedro Ruy-Blas entitled 'De Todo Corazón' (With All My Heart) was released . It's a tribute to the Standars from his country, Spain. It represents a collection of musical memories from various generations done in a vocal jazz style. This time out , he has collaborated with masterful pianist Horacio Icasto, who, without a doubt, now for many years is considered one of the finest piano players in all of Europe. 'De Todo Corazón' has been nominated as Best Jazz Record in the Spanish Music Awards. He performed in the Plaza Mayor of Madrid, as a part of Las Fiestas de San Isidro 2003.

He took part in another musical 'Cats' in the Teatro Colisseum in Madrid, playing the role of Old Deuteronomy for a year, since the opening in December of 2003.

In 2005 recives an award to all his career from spanish international Viajazz Festival, by hands of prestigious jazz female singer Dianne Reeves.

2008. “Ample”. A new album by Pedro Ruy-Blas. 10 songs composed and producced by himself, for Global Jazz records label, is released at May. He has recorded with his cuartet the Telecinco TV musical show called “Fusión Sonora”. Pedro is invited as guest soloist with the 60's singers Choir of the University Carlos III. 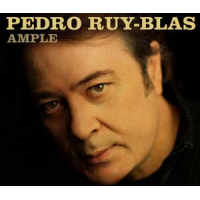 All About Jazz musician pages are maintained by musicians, publicists and trusted members like you. Interested? Tell us why you would like to improve the Pedro Ruy-Blas musician page.