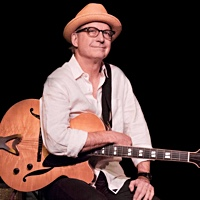 Pat’s chops allow him to move about with ease and freedom and show his musical experiences to be broad.
—George Benson

An integral part of the Thornton School of Music Guitar Faculty at the University of Southern California for twenty-four years, two of Pat's books, Arpeggios for the Evolving Guitarist and Melodic Minor Guitar are part of the USC Thornton School of Music instructional series (Mel Bay Publications). Pat has also been on the faculty of the Monterey Jazz Festival Summer Jazz Camp, Guitar College Summer Guitar & Bass Camp, the University of Tulsa Summer Jazz Camp, and Interlochen Center for the Arts.

A native of Tulsa, Oklahoma, Pat grew up playing music with his Dad, other guitarists, singers, and bands, from the age of five. After majoring in music composition at the University of Tulsa, Pat moved to Southern California in the early 1970's where he has recorded and toured with George Benson, Natalie Cole, David Benoit, Ronnie Laws, Hubert Laws, Tom Scott, Al Jarreau, Chick Corea, Dave Brubeck, Dave Koz, Jane Monheit, Olivia Newton John, Melissa Manchester, Burt Bacharach, Jose Feliciano, and many others.

While recording hundreds of commercial jingles, records, films, and television shows, Pat also worked for several years as the guitarist in house bands on the Merv Griffin, Pat Sajak, and Carol Burnett television shows. He has also written more than one hundred-fifty compositions that have been recorded for CDs, film, television, and music libraries.

All About Jazz musician pages are maintained by musicians, publicists and trusted members like you. Interested? Tell us why you would like to improve the Pat Kelley musician page.