After having moved to Paris, he has recruited three great musicians to found the “Oswando Jazz Quartet” with whom he released his last album “Towards Freedom”. This album deals with people coming across during their mutual immigration trip: on one side, an afro-american jazzman called Isaac Brooks from New York and willing to break through with his music in Paris; on the other side, a Polish couple, scared by the growth of Nazism in Europe and trying to flee towards the United States. This album also pays tribute to two anti-segregation activists: Jean McNair who died in 2014 and the famous Rosa Parks.

Born in Kinshasa, Oswando left with his family to France, Basse-Normandie when he was 9 and then learnt French at his arrival. There, he has luckily come across the ex-Black Panther activist Jean McNair who has avoided him to land in the streets and who has made him discover America history and its great black artists such as Nat King Cole or James Brown. Those artists inspired him in his music writing including his first hit “Dark Child” released in 2007. This song has been rewarded in many festivals and raised his local notoriety. 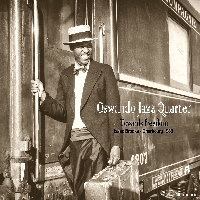 All About Jazz musician pages are maintained by musicians, publicists and trusted members like you. Interested? Tell us why you would like to improve the Owando Jazz Quartet musician page.