Since moving to New York in 2012, saxophonist Nick Brust has established his voice on the saxophone with an adventurous harmonic imagination and incisive, soulful sound. As much a composer as a performer, Nick co-leads the Brust - Horowitz Quintet, a group that performs mostly original compositions regularly around NYC. Equally influenced by traditional jazz from the blue note era as well as the musical innovators of today, the group recently released an EP, 'Introducing Brust-Horowitz Quintet,' in December 2013.

Before moving to New York, Nick attended New England Conservatory in Boston on scholarship, where he studied with Jerry Bergonzi, Frank Carlberg, Ran Blake, John McNeil, Donny McCaslin, and Miguel Zenon. He graduated in May 2012 with a Master's degree in Jazz Performance.

Nick was raised in Rochester, NY, where he began his studies with Vince Ercolamento, a disciple of George Coleman who has established himself as one of the prominent voices on the tenor sax in the greater Rochester area. Nick earned his Bachelor’s degree in Music Education and Jazz Performance at the Eastman School of Music, where he studied with Harold Danko, Walt Weiskopf, and Chien-Kwan Lin. While in Rochester, Nick performed with the New Energy Jazz Orchestra with Carl Atkins, the Rick Holland/Evan Dobbins Little Big Band, the Gap Mangione Swing Orchestra, and the Westview Project. The Westview Project released an album, “Aspire,” that features “Forbidden Fruit,” one of Nick’s original compositions. “Forbidden Fruit” has been played repeatedly on Rochester’s Jazz station, WGMC Jazz90.1.

In recent years, Nick has had the privilege to perform in notable venues such as Jazz at Lincoln Center, The Bar Next Door, The Bitter End, Wally’s Jazz Club, The Lily Pad, NEC’s Jordan Hall, Eastman’s Kilbourn Hall, and Eastman Theatre.

Nick has many influences on the saxophone, but the most prominent voices that have influenced his style are the tough, rhythmic styles of George Coleman and Jackie Mclean, the warm expressive sound of Cannonball Adderley, the imaginative harmonic conception of John Coltrane, the melodic playing of Dexter Gordon, and the syncopated melodies of Charlie Parker. Show less 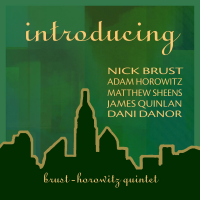 All About Jazz musician pages are maintained by musicians, publicists and trusted members like you. Interested? Tell us why you would like to improve the Nick Brust musician page.