”Mikan and I have played together on many occasions..He's a very good musician, but what I like most about him is his fire and spirit. He seems to truly have a grasp of the essence of jazz piano.” -Charles Mcpherson

“It's always a pleasure to watch Mikan perform. His consummate command of the keyboard allows him to express musical emotions with inventive ease.”- Chuck Perrin

An accomplished pianist with over a decade of professional experience playing both in Europe and the U.S., Mikan has shared the stage with jazz notables like Tony Scott, Clifford Jordan, Chet Baker, Ernie Wilkins, Ralph Pendland, Anthony Wilson, Willie Jones III and Charles McPherson. On piano or synthesizer, Mikan's strong improvisational skills have thrilled and touched live audiences. Mikan's experience extends to orchestras, bands and groups in concert. With radio and television credits and local jazz club appearances, he has developed an audience who know and love great jazz.

Born in Pristina, Serbia, he followed his dreams and jazz to New York City in the early 90's. Listening to American radio in Eastern Europe as a young child, his father, an amateur guitarist, would expose him to the music of all the jazz greats and he was fascinated by the sound. They would capture this music on a reel to reel and he would transcribe by ear the nuances, rhythms and solos of artists such as Oscar Peterson, Wes Montgomery and Mccoy Tyner. He would learn to speak “jazz” through their music until he found his own voice,

Music encompasses and transcends all languages, races and cultural barriers to present a common ground where people of any age, race or denomination can enjoy the rhythm and harmony brought through jazz. Jazz embodies the best of what is possible in life; freedom, creativity, new, unexpected harmony and finding ways to fully express oneself within the group while supporting the sounds of the other.

I have seen this man bring joy through his music to all types of people in many different settings, from concert hall to small club to street corner. The result is a oneness that comes from bringing people into the moment with his music and talent; the lines that separate us from each other are suspended and a moment is shared and enjoyed.

No two times are the same, his music is always evolving, being a constant search and discovery of what's possible in each new moment with an open mind, ears and heart. Choices made at every note to the next creates the expression of the artist. Mikan always presents himself with class and dignity in appearance and demeanor and communicates with a rare honesty. His music is simply a joy to listen to. 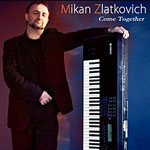 All About Jazz musician pages are maintained by musicians, publicists and trusted members like you. Interested? Tell us why you would like to improve the Mikan Zlatkovich musician page.