After listening to “Room with a Groove”, it’s easy to understand why the musical talents of Michael Sims are constantly being sought out, from one end of the musical spectrum to the other. Fueled by his long-time love of jazz, and propelled by years of lending his guitar expertise and talent to a variety of artists, ranging from, N.W.A., Dr. Dre, George Benson, Cypress Hill, and EZ E, to Peter White and Michael Bolton, to mention just a few, guitarist Michael Sims is fueled and ready to introduce his second solo album, “Room with a Groove”. Michael’s chameleon like ability and soulful knack to command a track, with such style and magnetism, allows the listener to fall into a smooth and idyllic groove.

Multi-talented, Sims plays bass, keyboards and drums as well as guitar, but in spite of his impressive credentials and obvious talent, he bided his time before stepping into the spotlight. "For years I was more like a student in a way, listening to jazz and reggae, and yet, I was working in the hip hop world. A certain amount of all of it stuck, and suddenly I realized I had a style of my own."

That style was born in San Francisco, where his early inspirations were Jimi Hendrix and Eric Clapton. Then he heard a John McLaughlin record. "It really turned me upside down. It had so much more going on than I had ever heard before." With the Mahavishnu Orchestra as his starting point, Sims began to explore the roots of jazz, finding his way to the sounds of CharlieParker, John Coltrane and Thelonious Monk.

His early experiences in L.A. were a far cry from the world he read about in the legendary Tommy Tedesco’s Studio Log column in -Guitar Player magazine. Slowly, his willingness to take any session that came his way began to payoff. Through Donovan Smith, owner of a studio where Sims was a regular, the blonde haired, blue eyed Sims was introduced to Dr. Dre, just as West Coast Hip Hop burst onto the charts. "I was working on some demos at Donovan’s studio where those guys were coming in after school and laying down tracks, and we got to know each other. Then, just around the time they’d gotten to the point where their record had sold about a half a million copies, they needed to replace their guitar player. They called me in, and I worked on a song for Michel’le called “Something in My Heart” which ended up as a gold single. From that point on, I was entrenched in the Ruthless Records West Coast Hip Hop camp." Soon other producers were knocking on Sims door, and he went on to work with a series of artists whose names fill the Top Ten on the R&B charts including, Ice Cube, Vanessa Williams, Ralph Tresvant, Domino, Andrea Martin, Jennifer Love Hewitt, Tyler Collins, and Brandy.

As the demand for his services increased, he took to the road with such mainstream artists as Michael Bolton and Jeffrey Osborne. Eventually, Sims began to move away from hip hop, although his five year tenure in the musical environment certainly played a strong role in the formation of his own style.

That was then and this is now…………Let “Room with a Groove” seduce you and bring you to that smooth, fluid, and sexy place that only this kind of music can.

Michael is currently in the studio working on his third release. Show less

Michael Sims guitar
"Michael Sims collection "Room With A Groove" is very aptly titled. You will find equal parts of smooth, sultry guitar with jazzy funk that is altogether quite palatable. Michael's two collaborations with Gerald Albright are especially nice. It's a shame that smooth jazz radio did not discover this project, which is another coal on the fire of smooth jazz radio stations disappearing from U.S. markets. The format needs more of the kind of music you'll find here on Michael Sims collection and less Pop and R&B. Also, song writing on this release is creative and invigorating." Shannon Rice, Smooth Jazz Radio, Chicago 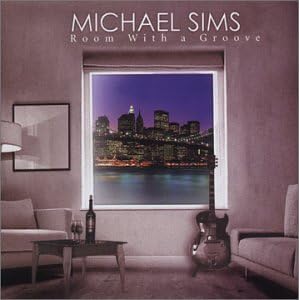 ROOM WITH A GROOVE

All About Jazz musician pages are maintained by musicians, publicists and trusted members like you. Interested? Tell us why you would like to improve the Michael Sims musician page.