Mark Ledford was an American trumpeter, singer, and guitarist. He was known for his multi-instrumentalism and his membership in the Pat Metheny Group

Ledford grew up in Detroit and attended Berklee College of Music between 1978 and 1982. After he graduated, he took a job in advertising while doing session work with Stephanie Mills, Jon Hendricks, Special EFX, Michael Brecker, Kevin Eubanks, Don Byron, Living Colour, Prince, and Bill Evans. He would also later contribute to the soundtracks for the Spike Lee films Mo' Better Blues and Do the Right Thing.

In 1986, he began a working relationship with Pat Metheny, appearing live with the Pat Metheny Group and on recordings, such as Secret Story and Still Life (Talking). He also worked with Bobby McFerrin's a cappella group, Circle.

Between 1990 and 1992, Ledford taught master classes in trumpet at the Banff Centre in Alberta, Canada. In 1998, he released a solo album, Miles 2 Go, a tribute to Miles Davis.

On November 1, 2004, Ledford died of heart disease in Los Angeles. 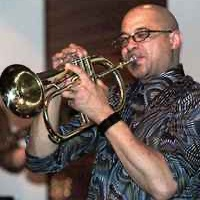 All About Jazz musician pages are maintained by musicians, publicists and trusted members like you. Interested? Tell us why you would like to improve the Mark Ledford musician page.