She became immersed in the London jazz scene in the late 70’s and 80’s and switched from studying classical piano at music college to saxophone and started to play jazz. Lynda has been on that journey ever since. Lynda is mainly self-taught but along the way has had some coaching on the saxophone and in jazz harmony with an array of great exponents of the genre. She joined John Steven’s Community Music project in 1984 first as a trainee workshop leader then was kept on as a workshop leader until she left in 1987 due to moving to the South Coast.

Since living in East Sussex Lynda has had the opportunity to work with some great musicians and has developed her music writing skills. She has a collection of material that has not been released on CD yet and there are two live recordings on YouTube of two of her compositions Serenade and Heron.

Lynda set up two award winning jazz clubs in Hastings, The Street Jazz, a free event in a bar called The Street and secondly Hastings Jazz club. She managed Hastings Jazz Club for 3 years and ran a two-day jazz festival that included, Julian Joseph, Toni Kofi, the late Harry Becket, Liam Noble, Juliet Kelly, Trevor Watts and Veryan Western. The jazz club also played host to such notable musicians as Alan Barnes, Gilad Atzmon, Annie Whitehead, Steve Lodder and Brass Jaw with the amazing Paul Towndrow. Both these projects made Lynda realise that she did not want to run a club but wanted to play.

Lynda is the second eldest child of 5 siblings born to immigrant parents Her father came to the England from Guyana in 1944 with the Royal Air Force to help with the war effort. After the war he was granted British citizenship to stay in the UK. He met Lynda’s mother at Tottenham Court Road Palais in 1945 they married in 1946 and it was a partnership that survived for more that fifty years. Her father Robert Murray had his book “Lest We Forget” published in 1996. It is a collection of aural histories from West Indian ex-servicemen who came to England to help with the war effort and then decided to settle is Britain after World War II. This book is credited in Angel Levy’s prize winning novel ‘Small Island’, (winner of the Whitbread Book of the Year and Orange Prize for fiction) ‘Lest We Forget” is available to buy on Amazon. 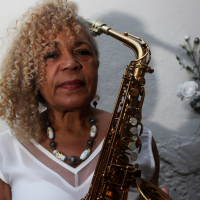 All About Jazz musician pages are maintained by musicians, publicists and trusted members like you. Interested? Tell us why you would like to improve the Lynda Murray musician page.