Łukasz Pawlik was born into a family with a rich musical tradition. Both of his parents are successful concert pianists. His mother Jolanta is an active chamber musician and lecturer at F. Chopin University of Music in Warsaw. His father Włodek Pawlik is one of the most celebrated jazz musicians in Poland, the first Polish jazz musician who won a Grammy. Growing up in such circumstances, he was exposed to classical music as well as jazz from an early age and started his musical education as a child. The first instruments that he picked were the piano and the drums, although it was the cello that became his primary instrument for the following years. The relationship with this instrument has been lasting until today.

Łukasz has had an opportunity to play in some renowned German orchestras, such as Düsseldorfer Symphoniker and Sinfonieorchester Wuppertal. He was also a prize-winner of many cello competitions, including the first prize at the K. Wiłkomirski Cello Competition in Poznań, enabling him to study in the USA, which proved to be a milestone on his musical path. It was during the time of his studies at Western Michigan University, when he became keenly interested in jazz. 5 semesters spent studying the intricacies of different kinds of music, composition and counterpoint, creative interactions with other students spurred him to start to develop his own musical language.

The first, important platform for his compositional attempts was the international jazz-group Kattorna, a band that was formed to celebrate the music of Krzysztof Komeda, whose works Łukasz strived to popularize internationally. However, as the time passed, the group’s repertoire started to gravitate towards Łukasz’s musical visions, in the meantime, gaining top honors at many jazz competitions, such as Warsaw Hopes, Berlin Jazz Award, Krokus Jazz Festival, Jazz Nad Odrą (2nd prize for Łukasz at the Individual Competition). In 2010 the band recorded an album “Straying To The Moon”, positively received by the critics, that comprised mostly Łukasz’s music. After a couple of years spent as a member of symphony orchestras, Łukasz started to work on new material for the upcoming CD under his name. He selected a bunch of outstanding musicians to record the instrumental parts, such as the saxophonist Dawid Główczewski, with whom he’d already collaborated for many years in Kattorna, the Poland’s top, Grammy- winning rhythm section Paweł Pańta – Cezary Konrad, as well as special guests: Mike Stern and Michael “Patches” Stewart. The material can be described as a multi-layered contemporary jazz. It was the very first album, on which Łukasz appeared as a performer, composer and a producer. The record met with enthusiastic reception in Poland and paved the way to concerts of Łukasz’s band with Mike Stern. The musical journey led Łukasz to the completion of an entirely new material that he was composing through 2016 and 2017. His new album „Long-Distance Connections”, released in June 2019 in Poland is a truly global undertaking, as it was recorded on 3 different continents by musicians from the USA, Poland and Australia. This time around, Łukasz was fortunate to gather a line-up of his musical idols, such as Randy Brecker, Mike Stern, Dave Weckl, Tom Kennedy and Gary Novak, along with the top Polish jazz musicians that he works with domestically to create a blend of mesmerizing personalities delivering heartfelt performaces of the highest calibre. The album was co-produced by the drum legend Dave Weckl. Show less 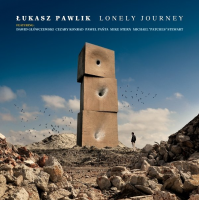 All About Jazz musician pages are maintained by musicians, publicists and trusted members like you. Interested? Tell us why you would like to improve the Łukasz Pawlik musician page.