Luis was born and raised in Venezuela into a musical family, where he was encouraged for music since he was 5 years old, dancing and singing at family gatherings. His father and his older brother perform as vocalists and folk band musicians, another brother has performed as live and recording bass player

Always drawn into the arts, incurred into the graphic ways and was a graphic designer for 10 years while at the same time working as a personal trainer and Group Fitness/Dance Fitness Instructor where he quickly grew a following thanks to his infectious energy on stage. During his time as a personal trainer, he attended a swing dance class where he immediately got hooked, specializing in Lindy Hop and West Coast Swing, the latter where he has competed nationally, yet is just as enthusiastic for all other dance styles. Dancing for Luis is an avenue where he has been able to explore and express all types of rhythm variations.

Rhythm syncopation and all its variants have always been an intense interest for Luis. So naturally, the percussion side of music is what has called out to him, to which he honored by practicing anywhere he had a chance, first over any countertops, dashboards and kitchen sinks before deciding to get his first set of Bongos and began teaching himself over salsa recordings of the golden era of the 70s and 80s to which he grew up with.

Bringing his bongos at a drum circle, he had a chance to play with a conga drum; it was settled: percussion is his favorite music avenue, it would be another few years before he got his own set.

In the meantime, dancing was a way to put his rhythmic sense into a performance endeavor, and to this day still enjoys attending live bands to sing and dance to live music.

It was in one of those live band jams where Josh Hindmarsh and Victoria Woods who were performing onstage at the time, noticed his sense of rhythm and figured out that Luis just might be the percussionist they're looking for. After a short audition/rehearsal, Luis has joined the Hot Tonic band since January 2021 where he is able to express and add to the cohesive energy of all its members.

Luis also does vocals for Hot Tonic and has performed as a vocalist at local jams and venues. 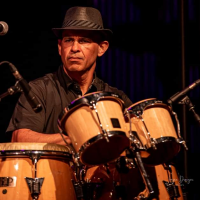 All About Jazz musician pages are maintained by musicians, publicists and trusted members like you. Interested? Tell us why you would like to improve the Luis Ramirez musician page.