Composed by a cellist from the Paris Conservatory and a self-taught guitarist, the duo performed all over France these last years and knew how to get the attention of radio shows (Matinale Culturelle/France Music, Jazz Box/Aligre FM, …).

Dynamic bows and inspired riffs allow them to explore and merge different influences, for a brand new style: “contemporary world music”, in the borders of jazz, rock, and arab-andalusian music

Complementary in many ways, both musicians knew how to transform their differences into strength, offering us a rich repertoire, in which each brings his specificities and his plural influences. They so forget conventional borders, and invite us in an unforgettable and singular musical experience.

At the end of 2015, Lillabox joined the label Plaza Mayor Company, and start recording its first album a few weeks later. Talented Youssef Hbeisch (percussionist of Trio Joubran) and Tara Baswani (singer and composer of the Cirque du Soleil) will come to sublimate their songs.

 Alex Hetzel Self-taught guitarist, Alex begins the music at the age of 16, with classics of rock and gipsy jazz with friends. He developed a unique style of play and a quite particular artistic sensibility. Having obtained an sound engineering degree, Alex decides to dedicate himself completely to the practice of the guitar, working in particular the “open tunings” style. Great lover of world music, and particularly the Arab-Andalusian one, his influences give a new dimension to his compositions. In 2007, with the singer Nawel Ben Kraiem, he founded the band Cirrus and signs on one year later a contract with the label Iris Music (Harmonia Mundi). It’s during this project that he meets in 2010 Mathieu Deranlot, with whom he will create a few years later the instrumental duet Lillabox.

 Mathieu Deranlot Mathieu begins the practice of the cello at the age of 5 at the Academy of Meaux, and quickly turns to the early music (viola da gamba, baroque cello). Always interested to discover new universes, he goes up and manages the batucada of the Academy, then is a part of his workshop jazz, as percussionist. In 2008, Mathieu creates with two friends the instrumental trio Baroque Harmonico (violas da gamba and theorbe), before joining the group “Opalescences” as violiste. Having followed in their European tour the Company “L' aigle de Sable”, he had the opportunity to play Bach in the Gallery of the Battles (Palace of Versailles) as well as to the Museum Rodin, on the occasion of big cultural and political meetings. In 2010, he joins the group Cirrus, and meets Alex Hetzel, with whom he will create a few years later the instrumental duet Lillabox. Show less

LILLABOX Cello
Lillabox is a guitar/cello instrumental duo founded in 2013 by Alex Hetzel and Mathieu Deranlot. Dynamic bows and inspired riffs allow them to explore and merge different influences, for a brand new style: “contemporary world music”, in the borders of jazz, rock, and arab-andalusian music 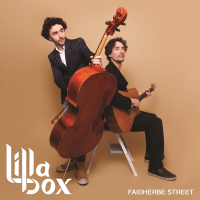 All About Jazz musician pages are maintained by musicians, publicists and trusted members like you. Interested? Tell us why you would like to improve the LILLABOX musician page.