This winter Leslie will star alongside his friend Lin Manuel-Miranda in one of the most anticipated theater events of the season as “Arron Burr” in Miranda's Hamilton at The Public Theater in New York City.

Leslie's self titled debut album is available now on iTunes!

Recent New York stage work includes the heralded City Center Encores production of Tick, Tick...Boom; A starring role alongside Raul Esparza in the Broadway musical Leap of Faith for which he was nominated for the Drama League Award and won the Astaire Award for Excellence in Dance. Other theater credits include Rent on Broadway, and regional stints at La Jolla Playhouse, Philadelphia Theater Company, and Westport Country Playhouse. He is currently scheduled star alongside Lin-Manuel Miranda in the highly anticipated world premiere of Hamilton at the Public Theater this winter. Leslie is a Princess Grace Award winner for Acting and a graduate of the Carnegie Mellon School of Drama. His self-titled debut album is now available on iTunes, Amazon, CdBaby, and all other online retailers.

Read more articles
“Leslie Odom Jr. gives us all the heart with his self-titled debut release; however, he still leaves us clamoring for more. In essence, Leslie Odom Jr. cleverly introduces us to a void that we didn't even know we had. The appetite of listeners are whetted for a second solo album, and we will rapturously listen to these nine tracks on repeat until we get more morsels of vocal brilliance from Leslie Odom Jr.” 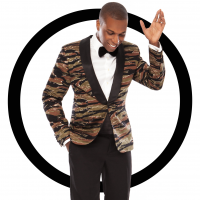 Look For The Silver Lining

All About Jazz musician pages are maintained by musicians, publicists and trusted members like you. Interested? Tell us why you would like to improve the Leslie Odom Jr. musician page.