Jazz Vocalist, Actor, Writer, and Entrepreneur Les Grant has appeared in off-Broadway and regional theatre, commercials, voiceovers, and independent films. He attended Circle in the Square's Musical Theatre Program in NYC, and wrote and starred in the one-person show Lonesome When You Go, which was featured at the Pulse Ensemble Theatre's OPAL series and selected by the NBC network for their PSNBC program in New York. Les studied acting at the Wilma Theatre and was a member of the University of Pennsylvania's award- winning Counterparts vocal jazz ensemble.

As a Jazz Singer and Bandleader, Les performs regularly in and around New York, as well as throughout Europe with his band, the Les Grant 5. The LG5 features some of the very finest young jazz musicians in the city, and performs innovative and soulful interpretations of jazz, blues and pop standards. His New CD, Way Forward Way Back, recorded at Systems Two Studios in Brooklyn, features a stellar lineup: including John Chin (Fresh Sound/New Talent Records) on Piano, Dan Rieser (Norah Jones, The Little Willies) on Drums, Matt Pavolka (Vista) on Bass, and John Ellis (Thelonious Monk International Saxophone Competition Finalist, Double-Wide, Criss Cross Jazz) on Saxophone.

I recorded my most recent album with a vintage Neumann u67.that was just about the prettiest sounding mic I've ever used - many thanks to Systems Two Studios in Brooklyn. Live I use Sure Beta 58's.

Les Grant Vocalist
“A wonderful voice and a phrasing that is impeccable” – Artist Launch.com

“adds his own brand of special sauce that makes this more than just another romp through the classic songbook. The combination of his voice, phrasing and sense of swing makes this a super sweet piece of ear candy...A nice, solidly driving set that resides easily on the top shelf. Check it out.” - CHRIS SPECTOR, Editor and Publisher, Midwest Record (Nov 06, 2013) 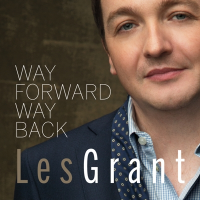 All About Jazz musician pages are maintained by musicians, publicists and trusted members like you. Interested? Tell us why you would like to improve the Les Grant musician page.