"LAURA THEODORE has one of the most striking voices in jazz." (Rick Anderson, All Music Guide ) Reviewers have compared her to such legends as Ella Fitzgerald, Peggy Lee, & Sarah Vaughan.

Ms. Theodore can be seen weekly as host of the popular Manhattan Cable music television show All This Jazz, now in it's 6th year. She has made guest appearances on Good Morning America, Robert Klein Prime Time, Phil Donahue, America's Talking and the CBS New's Year's Eve Special. Laura has toured throughout the U.S. and performed at numerous major events such as: Night of 100 Stars, George Bush Inaugural, Fire & Ice Ball and The American Film Awards. Laura has recorded five solo CD's including Tonight's the Night , which won a Musician Magazine BUBS Award. Her recent release, "What The World Needs Now Is Love," debuted in June 2003 and is climbing the jazz charts. Ranging from the Golden Age of Gershwin and Rodgers, and swinging us on to Bacharach and the blues, the songs on this new recording include: What the World Needs Now is Love, Fever, Some of My Best Friends Are the Blues, How Deep Is the Ocean, S' Wonderful, The Lady is a Tramp, The Very Thought Of You, and I'm In The Mood for Love. Originally from Cleveland, Ohio, Laura grew up in the theatre and was often seen in the East Ohio Gas Television series based on popular fairy tales. Arriving in New York City, she quickly became a favorite on the nightclub scene. She was first discovered by Barney Josephson, owner of the legendary nightclub spot, The Cookery where she appeared on the bill with the late, great Alberta Hunter for a sold out three month run. Laura went on to play the Big Apple's hottest venues, and headlined in concert under the musical direction of Mr. Mercer Ellington. Laura is the title cut vocalist on producer Jim Steinman's cult classic Original Sin (which has since been covered by artists such as Meatloaf and Taylor Dayne.) Laura is also known for her portrayal of Janis Joplin in the Off-Broadway hit, Beehive which earned her a Backstage Bistro Award and for her acclaimed performance as Joplin in the World Premier production of Love, Janis for which she received the Denver Drama Critics Circle Award. What the media is saying!... "A formidable talent...a fully developed four-octave range and a styistic versatility that encompasses sophisticated pop-jazz, 1960's soul music and big cabaret ballads." Stephen Holden, New York Times

"The world may need love now, but it also needs more original artists like Laura Theodore." Dan McClenaghan, All About Jazz

"It is a must buy for those who like Jazz vocals." Ferdinand Maylin, JazzNow

"Laura Theodore has one of the most striking voices in jazz" Rick Anderson, All Music Guide

"Laura has a big voice with tons of character. Her personal touch has lots of fearless expression placing her among today's best jazz singers. " O's Jazz Favorites

"Laura Theodore will find many new fans with the release of her CD collection, WHAT THE WORLD NEEDS NOW IS LOVE. Highly enjoyable!" Lee Prosser, Jazz Review

"Makes the transition from low down blues and melancholy to exhilaration and effervescence. I hope we'll be hearing more from her." Paul Donnelly, ejazznews

"...she has a sound influenced by Sarah Vaughan and Sheila Jordan. " Randy McElligott,CHOU Canada

"Forceful and dynamic, there is nothing half-hearted about this singer. She has a bold, take-charge way with a song and has a dynamic approach." Bruce Crowther, Jazz Journal International

Theodore is enjoying the songs she sings and brings back a very nostalgic look at when life seemed a little simpler. Delightful! Irene Wadkins, Jazz Journalist Show less 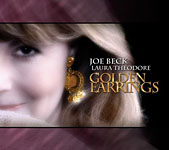 What the World Needs...

All About Jazz musician pages are maintained by musicians, publicists and trusted members like you. Interested? Tell us why you would like to improve the Laverne Butler musician page.