For the outstanding pianist/composer Laura Dubin, the serious pursuit of jazz expression began at the age of 12 in her native Rochester, NY. In 2007 she embarked on a 7-year journey of study and performing that brought her to various points in the U.S. and Latin America; and now Laura’s path has come full circle to her hometown. ​“Whenever I came home between activities, I found that I loved the city more and more with each visit. There is a real sense of community here, and a deep appreciation for art, music and culture. It’s a wonderful environment to express and grow as an artist.”

With her husband and musical partner Antonio H. Guerrero – who she met during her 15-month stint with a jazz trio on Holland America Line cruise ships touring Europe, French Polynesia and the Caribbean; and with whom she performed consistently in clubs, major venues and festivals with her trio in and around her new home in Mexico City – Laura returned to Rochester in 2014, quickly becoming a thriving member of its cultural scene both as a performer and educator.

After two years as a popular and much sought-after ensemble, the trio reached a new plateau with a triumphant featured performance at the prestigious Xerox Rochester International Jazz Festival in 2016 (where they also performed in 2017 and will perform again in 2019). That performance was recorded, and then released in late 2016. Following her two previous acclaimed albums – 2013’s Introducing the Laura Dubin Trio, and Laura Dubin Plays the Great American Songbook in 2015 – Laura Dubin Trio Live at the Xerox Rochester International Jazz Festival is undeniable evidence of the development of a highly promising young musician into a mature and powerful new presence on the contemporary jazz scene. Where her debut album included ten original compositions and the second featured her original arrangements of ten classic songs by Gershwin, Porter, Rodgers and other legends of song, the live album combines her outstanding composing and superb arranging skills to reveal an artist of depth, command and originality – further expressed through her own unique take on the “mashup” concept. “I love finding random connections between seemingly unrelated pieces of music, such as two jazz standards or a classical piece combined with a standard. The connection could be any one of a number of things between two or more pieces - the key, a set of chord changes that can weave into those of another tune, some type of hook or melodic phrase that links the two, a certain mood, the list goes on. Sometimes these “mashups” are intentional, and other times they just come to me as I’m practicing or imagining music in my head.” A virtuoso pianist extensively trained in both the Western Classical and Classic Jazz traditions, and well-versed in Latin and film music, Laura melds all of her musical loves into a seamless web of breathtaking creativity and adventurous exploration throughout the live album, providing a vivid example of her in-person performance concept. Mozart steeped in the history of jazz piano; Beethoven welded with Songbook gems; Ellington with Chopin; Debussy with Gershwin; Ravel with Rodgers & Hammerstein tinged with Latin; Cole Porter with Bill Evans – all reinvented, re-imagined and forged into very personal statements placed alongside her own singular compositions.

While fully committed to performing and composing – with more than 50 compositions in her book to date, citing Oscar Peterson, Horace Silver, Fred Hersch (with whom she has had a mentoring relationship since high school and up to the present), Bill Evans, Marian McPartland, Dave Brubeck and Claude Debussy among her deepest influences – Laura is also dedicated to teaching both in the institutional format through workshops and master classes from the elementary to the collegiate level, along with teaching privately. She currently teaches at Musically Fit music studio in the town of Pittsford. Although her private students range in age from pre-schoolers to octogenarians, she has a special passion for helping to mold young minds in both the appreciation and the act of artistic expression. “Just about every time I’ve done a performance when there have been kids around, they immediately become entranced by the music and usually start dancing. The young mind is so fresh and capable of learning things quickly, and for this reason I believe learning first and foremost how to play by ear - in the same way that we learn to speak our native language before learning how to read it. Anytime you’re exposed to music, and especially if you’re exposed to it frequently, it eventually becomes a natural part of your world, and I think this is especially true with children.”

Although Rochester will remain her home base, plans are in motion to shift into a more extensive level of touring both nationally and internationally in the near future. In addition to her performance experience in Mexico and the Rochester festival, Laura has performed all over the northeast quadrant of the U.S., including top clubs in Washington DC, Cleveland, Buffalo and various venues in New York City, as well as the Wall Street Jazz Festival in Kingston, NY; the River Jazz Festival in Bethlehem, PA and the Kennedy Center’s Mary Lou Williams Women in Jazz Festival. Above all, playing music – naming Hersch, Peterson, Horace Silver, Bill Evans, Red Garland, Marian McPartland, and Wynton Kelly among her models – is her greatest joy.

Live At The Xerox... 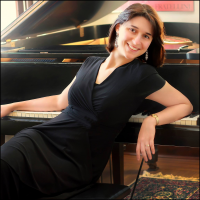 All About Jazz musician pages are maintained by musicians, publicists and trusted members like you. Interested? Tell us why you would like to improve the Laura Dubin musician page.