Kurt Thompson started playing trumpet officially in 5th grade. However, by the end of 6th grade, he was last chair and the worst trumpet player in the band. Kurt enjoyed school sports more at that time.

During the summer between 6th and 7th grade, Kurt got with a private instructor for the first time and his talent at trumpet became obvious when he actually made an effort. Kurt started 7th grade and by the Christmas concert was 1st chair. Kurt was first chair in almost every band from that point on.

Kurt auditioned and made 1st chair and/or solo trumpet at Tennessee All-State Band.

Kurt received a full music scholarship to Austin Peay State University where he became 1st chair in every music organization there. Kurt was known in college for his rendition of Maynard's “Gabriel”.

This video of Kurt was sent to Maynard in CA and also a copy was sent to NTSU. Kurt received a positive reply from Maynard regarding auditioning and was invited down to NTSU to meet Maynard and some other potential candidates at the university.

Notwithstanding the last 20 years, Kurt has performed in too many bands to list here, but Broadway shows at OPRYLAND U.S.A, BUSCH GARDENS, KING'S ISLAND, numerous recording sessions in Nashville, Cincinnati, Seattle, Touring with The Jordanaires ( Neil Matthews and Gordon Stoker...Elvis' back up singers from when he first was on the Ed Sullivan Show).

I teach trumpet lessons from beginner through professional. If it is a pro, I am usually working with them on high or extreme high register techniques. 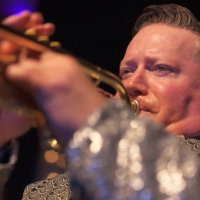 All About Jazz musician pages are maintained by musicians, publicists and trusted members like you. Interested? Tell us why you would like to improve the Kurt Thomson musician page.