Keven Aland (violin) began his studies with Master Miltiades Siadimas of Athens, Greece (acclaimed soloist of the N.Y. Philharmonic and Metropolitan Opera). Aland gave his solo debut with the Venice Symphony at age 14. In high school, Keven received highest honors in All-State Orchestra and received much recognition from Governor Martinez as recipient of the Southern Bell Fellowship two years in a row. A graduate of the University of Colorado at Boulder, Keven had a Fellowship with the London Symphony Orchestra and has played with the South Florida Orchestra, Sarasota Chamber Orchestra, Transylvania Symphony Orchestra, Boulder Philharmonic, and the Shostakovich String Quartet. After completing his performance degree at C.U. Boulder, Aland discovered he had a passion for music beyond classical. Aland has since performed professionally with various ensembles including but not limited to: bluegrass, jazz, rock, country, Celtic, Blues, Latin, and Gypsy Jazz. Aland was the co-founder of the Lotus Fire, founder of Sampa Jazz, and can be seen performing locally with Impromptu Jazz, Hot Sun Quartet and Gypsy Wind. With Aland's versatility and ability to arrange almost any style of music, we have the ability to entertain any audience. 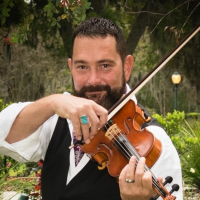 All About Jazz musician pages are maintained by musicians, publicists and trusted members like you. Interested? Tell us why you would like to improve the Keven Aland musician page.