Since age 15, Kenta Shimakawa has been chasing the exhilarating potential of improvised jazz. His compositions juxtapose that energy against the jarring timbres of modern metal, resulting in a unique sound that exudes intensity.

In 2014, Kenta moved to New York City to attend the New School for Jazz and Contemporary music. In addition to studying the sounds of M-Base and 20th century/chromatic harmony, he encountered a whole world of talented and upcoming guitarists. Inspired and determined to develop his own sound, Kenta sought the mentorship of accomplished visionaries such as Andy Milne, Kirk Nurock, and Nir Felder. Under their guidance, Kenta honed his skills as a bandleader, composer, and performer.

In late 2016 he established the group “TinderGodz”, a collective of New School colleagues. TinderGodz gave Kenta the opportunity to apply the lessons he had absorbed, culminating in the release of an EP “The Emergence” in January 2017. This EP credits Kenta not merely as a performer, but also as a recording and mixing engineer.

Continuing to cut his teeth as a composer, in 2018 Kenta won “Best Original Large Ensemble Composition” in the Downbeat student music awards.

The winning piece, “Glimpse” marked his foray into complex compositions including horn and string sections.

“Glimpse” became the title track for his debut album, which he released June 2019. The eight tracks weave together bombastic metal textures with idiomatic jazz instruments. Kenta managed every step of the creation process, both as an executive and artistic producer. Taking his role as an independent artist seriously, Kenta engineered nearly all the recording sessions and mixed the entire record himself.

His album includes performances by up and coming international musicians including Baptiste Horcholle, Kana Miyamoto, Sandy Winarta, and Arta Jekabsone.

Based in Tokyo, Japan, Kenta continues his quest as a composer, engineer, and performer of music that challenges the boundaries between genres.

“Glimpse” is out now on all digital platforms and a limited physical release.

From: Glimpse
By Kenta Shimakawa 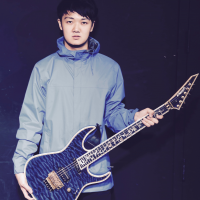 All About Jazz musician pages are maintained by musicians, publicists and trusted members like you. Interested? Tell us why you would like to improve the Kenta Shimakawa musician page.