Kendrah E. Butler has lived and breathed music ever since she could remember. She studied at Settlement Music School in Germantown, PA for 11 years with classical world renowned pianist Charles Pettaway. Kendrah studied jazz piano at the Mount Airy Cultural Center under the direction of saxophonist Anthony “Tony” Williams. At Mount Airy, she would intensely study jazz piano with greats such as Don Wilson, Kenny Gates, and for 5 years with the late great jazz pianist Eddie Green through a Roam and Haas Scholarship at Settlement Music School. Through her experiences in classical and jazz, Kendrah would premier on TV’s CN8 with the group, “The Best Yet Jazz Quintet”, cut a demo CD with Gamble and Huff records, perform around the tri-state area, and work with the late Grover Washington all before the age of 17. Kendrah also studied classical violin and wrote and conducted a full orchestration piece for her high school’s orchestra.

Upon completion of high school, Kendrah went on to Temple University and obtained a dual Bachelor’s degree in Political Science and Sociology with a minor in Spanish. After graduation, worked in the research world, taught piano, violin, and composition while continuing to perform regularly. In 2009, Kendrah recorded a CD at Milkboy Studio of original compositions and premiered it through a 2 night concert at the Philadelphia Clef Club. Kendrah is also a notable musical director having directed multiple Jazz and R&B groups including but not limited to: "nVizion", an all-female jazz group, the Kendrah Butler Trio, the "Satin Dolls" at the Philadelphia Clef Club of Arts, and is currently the musical director for the Diva Nation series funded through the Philadelphia Jazz Project. The Kendrah Butler Trio and ladies from Diva Nation were featured acts on Philly Cam, a television show that premiered on Comcast and OnDemand this year (2015). Kendrah has been a featured artist on WRTI's radio whose music is on recurrent rotation on both Jeff Duperon and J. Michael Harrison's shows.

Kendrah has also pursued multiple entrepreneurial efforts that include launching a "Women in Jazz" Philadelphia tour in the month of March and co-sponsoring the "Women in Jazz Finale Concert" with vocalist Rhenda Fearrington that was a huge success. The concert had about 300 in attendance. The second annual “Women in Jazz Tour” featured nVizion (all female jazz group), Rhenda Fearrington, Julie Charnet, and the ladies of Diva Nation and was co-sponsored by the Philadelphia Jazz Project. Kendrah is currently working with vocalist and Jazz Laureate Rhenda Fearrington in launching the third annual " Women in Jazz Series" for the month of March in 2016. In addition, Kendrah launched and co-sponsored "Jazz at the Kairos Room" a new jazz series in the East Falls section of Philadelphia which has opened new opportunities to jazz artists in the Philadelphia and surrounding areas. Kendrah has been sponsored by the Philadelphia Jazz Project to do a solo jazz piano performance as part of the premier of the Mary Lou Williams Documentary through Scribe Video at the International House in July 2015 as a tribute to the famed pianist. Kendrah has also scored the music for a documentary titled “The LaMott Community” as part of Scribe Video’s documentary project on various communities in and around the city of Philadelphia in 2010. The documentary was featured at the Kimmel Center for Performing Arts in 2010.

Kendrah is also a notable music director and minister of music at various churches around the city of Philadelphia and has performed as part of many jazz vespers and enjoys working with choirs of varied sizes and abilities. Kendrah has performed in jazz clubs, churches, and other notable venues such as the Kimmel Center, Philadelphia Clef Club, the International House, Drexel’s Mandel Theater, Venice Island Performing Arts Center, The Lancaster Avenue Jazz Festival, Cape May Jazz Festival, Chris’ Jazz Café, and abroad. Kendrah, from June –August of 2011 went on an Ethnodoxology missions trip to England, France, Germany, and Belgium helping Christians throughout northern France, Germany, and Belgium develop culturally relevant worship music in addition to performing with a team of 10 musicians through northern France in various churches and performance venues. ​ Beyond the realm of music, Kendrah obtained her master’s degree from Drexel University in Elementary Education in 2013. She is currently a contracted teacher at Gotwals Elementary School in Norristown, Pa. Show less

Spotlight On Jazz & Poetry Presents "Muses In Motion" at the Clarion... 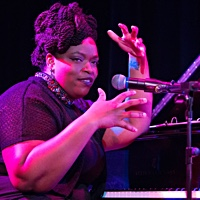 All About Jazz musician pages are maintained by musicians, publicists and trusted members like you. Interested? Tell us why you would like to improve the Kendrah Butler musician page.