When on a coast to coast USA tour with Columbia Records in his early 20’s, Jr Choy, born Delano Choy Jr. was referred to by a music critic after one of the concert performances as an “erupting “Volcano” on the trumpet, who hails from Hawaii”…the other musicians on the tour jumped on that immediately and so “Volcano” has been his nick-name ever since for some 25 years now. In his own words, “I just kind of went with it, realizing that people remembered “Volcano” a lot easier than my given name which is, Delano,…also that concert reviewer reminded me that “Volcano” rhymes somewhat with “Delano”! I guess he meant it as a compliment, I tell people that you can call me “Volcano” or Jr., (which my family refers to me as…”).

Born into a musical family, Jr Volcano Choy was always attracted to the trumpet and Jazz. “My Father, who is a Sax and Oboe player was a professional musician, starting out in the Air Force Band and then for decades playing the shows in Waikiki and also a member of the Royal Hawaiian Band, always had Jazz playing on the stereo at home, in fact, he told me that when I was as young as 2, I would be in front of the stereo with my plastic toy trumpet mimicking those great Clifford Brown solos!!...My Mother was also a Jazz aficionado, she herself being from a musical family, being the sister of Alto Sax Great, Gabe Baltazar of Stan Kenton and LA studios fame…she knew what was “swingin” and what wasn’t!...”I have one brother, David, who is also a musician (saxes) and currently resides in Maui, he gigs weekly in Maui and travels abroad with the “Doobie Brothers”… my Father, who well knew how uncertain the life of a musician could be, and with good, loving concern for the future economic stability of his 2 sons, always tried to steer us away from becoming professional musicians, however, both my Brother and I became professionals and joined the Musicians Union Local 677 in our teens.”

He then landed a gig being the horn voice in a quartet led by one of the great piano players from Hawaii, Betty Lou Taylor aka “Lady Fingers”... they backed Hawaii’s Premier Jazz vocalist, Jimmy Borges. Together they held a gig performing 6 nits a week for a couple of years at the Hyatt Regency’s upscale supper club called “Trappers” located on the strip in Waikiki. “…this was such a great learning experience for me being a young guy, to play every night with such wonderful musicians! Betty Lou Taylor knew every tune in the book and could play it in any key at the drop of a hat and so for me, it was like going to school every nite!..the Hyatt also brought in a featured Jazz Artist every couple of months and we were the “House Band” and so I got to perform with Jazz Greats like, Bobby Hutcherson, Stan Getz, Wynton Marsalis, Freddie Hubbard, Joe Sample, Anita O’Day and Bill Watrous to name a few!”…Trumpet greats Freddie Hubbard and Wynton Marsalis both urged Volcano that if he wanted to grow as a Jazz Artist, he would likely have to leave his native Hawaii and relocate to the “Mainland”…he soon got an offer for a steady gig at Walt Disney World in Orlando which gave him that opportunity to leave his Hawaii and relocate to Orlando where he lived and performed for the next 3 years. He then met Terri Spencer, fell in love, and then shortly thereafter got married. Currently they’ve been married for close to 25 years and have 5 children together.

Since Terri was from Ohio, near Pittsburgh, Pa, soon after getting married, they relocated to Pittsburgh where Jr Volcano Choy landed the trumpet chair with one of the great living Jazz Drummers, Rodger Humphries…in his own words, “when I first walked in that club in Pittsburgh, Rodger Humphries was playing, I could not see him, but at that moment, from what I was hearing, I knew that THIS WAS IT!...I asked if I could sit in, being new in town,.. After the set, he asked for my number, and then a couple weeks later, he called and invited me to join the band!..with all due respect to Hawaii and my up-bringing there, I myself along with many of his band alumni that has had the privilege to work with him through the years, refer to him as our “Musical Dad” and along with that, I consider Pittsburgh to be my “Musical Home”, there is a vibrant music scene there with a lot of great musicians, I really “grew up” there and really am forever indebted to Rodger Humphries in giving me that opportunity to be a part of his group for some 7 years.”

In one cold cold winter morning in 2005, Volcano woke up to temperatures outside that dropped down to the teens! at that moment, “as I was standing there outside in that shockingly frigid air in my Hawaiian flip-flops, I thought, this is insane!. I’ve had been away from Hawaii now for over 20 years and I think its about time to get back for a while to warm up!...and of course my wife was on the same page with me!”

...having been back in Hawaii for several years now, the Big Island of Hawaii being his home base, Volcano regularly travels to the “Mainland” for bookings/gigs and performs locally in Hawaii…. “there are a lot of really talented musicians here on the Big Island where I live, and although I do not perform as regularly as I did when I was in Pittsburgh, there are many occasions in which the music is great and encourages growth as an artist” Volcano has recently begun to serve as the Musical Director for the Volcano Art Center Jazz Ensemble. (name is just a coincidence, the Art Center is located near Volcano National Park and is in Volcano Village on the Big Island of Hawaii)... regarding the Volcano Art Center, Volcano Choy says, “I am really excited to start working with the Volcano Art Center, in particular with Mr. Dave Wallerstein who is the Director of the Musical Arts, he along with the staff of the Volcano Art Center produced a Jazz Concert in the beginning of 2011 of which I was a guest performer with the Honolulu Jazz Quartet,…I was so impressed with the level of production and coordination of the whole event that, when Dave proposed the idea of doing a Jazz series on a regular basis, I jumped at it and told him that I would love to be a part of it!” Show less 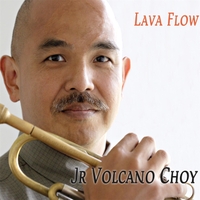 All About Jazz musician pages are maintained by musicians, publicists and trusted members like you. Interested? Tell us why you would like to improve the Jr Volcano Choy musician page.