Born to music within the wood fragrances of the famous Théâtre de la Gaîté Lyrique in Paris where his grand parents were both musicians and officers, José Fallot very early walked on stage like you walk on the moon. These dreams of a child started to become true when, after taking guitar in the early seventies, he put together a rock band dedicated to both the Beatles and the Stones, showing there a strong abilitiy to historical compromise. His first shy compositions came to life soon after, while he turned to bass because of the furious concurrency among the more than many six strings players in the Paris area at that time.

Wishing to understand more about some walking bass licks of Paul McCartney, José moved to jazz and studied with the organ player Yvon Gardette with whom he toured France, Switzerland, Germany and Belgium in the summer of 1975.

After attending a Tania Maria concert, Fallot made the decision to stick to jazz and face the years of learning, struggle and low fees that go with it. Many various partnerships followed, from duet to big band, as well as a more developped collaboration with singer Carole Sergent. As a composer and arranger, he also put together some big shows in Paris and since 1990, beside a strong touring and recording activity, he has been the programmer for the jazz festival and the winter season in the famous city of Versailles. His most timulating musical meetings have been with Dominique di Piazza, Jeff Andrews, Santos Chillemi, Ivan Julien, Franck Avitabile, Ricky Ford, Yves Carbonne and Mike Stern.

As it is the lot for every jazz musician, it took a while for Fallot to graduate from highly demanded sideman to leader. But he recalls this period as very fruitful, pointing out the many delighting opportunities he had to discover, learn and practice all the different styles of jazz that have nourrished his present playing and composing. Feeling ready for it, he put together his first quartet in the late 80s then soon after started a big band dedicated to film music and both projects are still running after over a thousand concerts in France and overseas.

Coming to his recording career, Fallot issued his first album as a leader in 2009. Being a swinging and striking collection of luminous and moving originals, that first Another Romantic opus received critical acclaim wherever it was reviewed. Show less 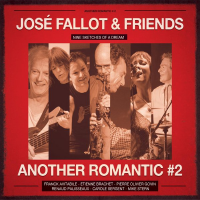 All About Jazz musician pages are maintained by musicians, publicists and trusted members like you. Interested? Tell us why you would like to improve the Jose Fallot musician page.