Jazz writers and musicians have described his tenor saxophone sound as "big and round", "full bodied", "muscular" and his style as "fluid, solid, individual, quite varied", and he "plays with harmonic intelligence." John Richmond's live engagements and recording sessions have included work with many of the top jazz musicians of our time.

A new CD is in the works.

The CD “Live at Cecil’s” was recorded in January 2007 and features Keith Saunders, Bill Moring and Eliot Zigmund.

His early recording as leader, "Round Once," on Consolidated Artists, featured pianist Mike Longo, bassist Buster Williams, and drummer Al Harewood, received favorable critical reviews and radio air play and was a "feature pick" of Cash Box magazine. Among his varied recording credits, he has appeared on two CDs by bassist Ray Drummond, "Maya's Dance" and "Vignettes."

He has worked in countless NYC venues and spent time living in Italy and performing all over Europe including the Umbria Jazz and San Remo Jazz Festivals. He was involved with Umbria Jazz in the early 80's where he also worked with the jazz clinics.

Born and raised in the New York City area, having lived on E. 15th St. for years, his musical studies began at age nine with clarinet. After studies at the Eastman School of Music in both saxophone and clarinet, he graduated from the Manhattan School of Music with a Bachelor of Music degree. His musical training has included studies with Joe Allard, his principal teacher, as well as Dave Tofani, Charles Russo, Harvey Estrin, Mike Longo, David A. Gross, Ramon Ricker, Tim Price.

He is a multi woodwind player including flute, clarinet, soprano, alto and baritone saxophones in addition to his main voice, the tenor saxophone.

He grew up in a culturally diverse environment and was exposed to classical music and soul music and rhythm and blues in his youth. His major influences include Charlie Parker, John Coltrane, Sonny Rollins, Joe Henderson, Wayne Shorter, Dexter Gordon, Miles Davis, Herbie Hancock, Bela Bartok, Jimi Hendrix, Frank Zappa, BB King, and R & B artists such as James Brown.

“I was so blown away and inspired when I first heard Charlie Parker that I had to become an alto player. Later, I began to really hear John Coltrane, Sonny Rollins, Wayne Shorter and Joe Henderson and I eventually switched over because I kept hearing the tenor in my mind.”

“During my time studying with Joe Allard, for about 6 years during the 70’s, I did my best to absorb his principals of playing, and I spent considerable time with him on clarinet and soprano too. He was a great inspiration both as a person and as a teacher and I’m so grateful to have had the chance to spend so much time with him. I realize what a privilege that was.”

“I also have to make mention of how influential my friend and classmate Kenny Kirkland was to me. I spent a lot of time with him, played with him almost daily while we were at Manhattan School of Music, and I learned a tremendous amount from him about everything. We all watched him develop exponentially day by day, it was astonishing, while most of us tried our best to improve in a somewhat linear fashion. I used to bug him to write things down for me or show me what he was doing on a particular thing. His loss was such a blow to me and to so many people.”

For a period in his life John was involved in boxing, and he derived many experiences from this. He made reference to this in his early recording called “Round Once” and has written tunes inspired by boxers Renaldo Snipes and Herschel Jacobs, his teacher.

In the late 70's and 80's he spent endless nights in NYC in places such as the Star Cafe, where Junior Cook ran nightly sessions and many great players would show up, the Blue Note after hours sessions with Ted Curson, and the Barry Harris Jazz Cultural Theater. “I learned a lot in that period, especially from Junior. If I wasn’t working, which was a lot of the time, I sat in anywhere possible with just about everybody just about everywhere, in all the clubs. I was out every night and always carried the horn with me.” He also learned from playing regularly with experienced musicians such as drummer David Jones and percussionist/multi instrumentalist Gil Chimes. Show less

David A. Orthmann, All About Jazz
RE: recent Newark Star-Ledger article by Zan Stewart

Richmond is the real thing. I've caught him several times at The Turning Point Cafe and he's taken care of business on the bandstand with the likes of Dave Schnitter, Jerry Weldon, Bobby Porcelli, and Walt Weiskopf. The Cecil's gig [April 17-18 09] is of special interest because Richmond has worked a couple of times with [Bob]DeVos and has a good rapport with the guitarist and Steve Johns.

A few months ago I started reviewing sets performed at The Turning Point Cafe, a small, intimate club which features jazz on Monday nights. The common denominator of the shows is tenor and soprano saxophonist John Richmond, who also serves as the series curator. Although I kept coming back to the club ostensibly to hear veteran saxophonists like Bobby Porcelli and David Schnitter interact with first rate rhythm sections, it was Richmond's solos that always stayed in my mind.

David A. Orthmann, All About Jazz
RE: recent Newark Star-Ledger article by Zan Stewart

Richmond is the real thing. I've caught him several times at The Turning Point Cafe and he's taken care of business on the bandstand with the likes of Dave Schnitter, Jerry Weldon, Bobby Porcelli, and Walt Weiskopf. The Cecil's gig [April 17-18 09] is of special interest because Richmond has worked a couple of times with [Bob]DeVos and has a good rapport with the guitarist and Steve Johns.

A few months ago I started reviewing sets performed at The Turning Point Cafe, a small, intimate club which features jazz on Monday nights. The common denominator of the shows is tenor and soprano saxophonist John Richmond, who also serves as the series curator. Although I kept coming back to the club ostensibly to hear veteran saxophonists like Bobby Porcelli and David Schnitter interact with first rate rhythm sections, it was Richmond's solos that always stayed in my mind.

Accompanied by a trio of longtime associates and minus another front line instrument, Richmond's July 14th gig proved to be an ideal means of gaining a fuller appreciation of his talents. During a seventy-five minute, seven selection set, a number of themes emerged. Instead of reaching for facile, emotionally charged climaxes, Richmond primarily invested in the solos as a whole. There was power in the movement and juxtaposition of small, telling gestures. Digressions were brief and meaningful. Only on reflection I realized what a large amount of information Richmond included in every improvisation. It was rewarding to concentrate on the details—things like his moving from a hard, thickset tone to a thinner more fragile sound in just a couple of bars; or, briefly rushing ahead of the beat and then inserting a pregnant pause.

Richmond's full-bodied sound became even more plush during the course of an “In Your Own Sweet Way” solo. He slowly and patiently grained momentum, hitting the tenor's upper register before sounding some foghorn tones. A soprano feature on Frank Foster's “Simone” gleefully danced and included hard swinging tangents and brief jumbled interludes. Never straying too far from the melody and a ballad feel, he displayed a veritable treasure trove of embellishments of Tadd Damenon's “Soultrane.” Richmond's wickedly propulsive phrases animated the standard “I'll Remember April.” At one point he spit out several seemingly unconnected notes and then rapidly shaped them into a coherent form.

Even in a region which boasts an abundance of accomplished tenors, Richmond's reemergence after several years away from the New York City scene is a stroke of good fortune. Throughout the set there was a fine contrast between his muscular tone and his unforced way of swinging and sustaining momentum. Like Porcelli, Richmond avoided tangents and anything resembling a cliche. His solo on “Along Came Betty” melded brief cries, stark blues locutions, and hard-charging runs, while staying in close contact with the rhythm section. The saxophonist briefly took some of the edge off his tone during the Latin section of Horace Silver's “Nica's Dream,” resuming with the heartier sound as he pounced on the tune's straight up swing bridge.

Tenor and soprano saxophonist John Richmond had no difficulty distinguishing himself in such fast company. Employing a full yet supple tone which made the horn speak, he was the band's most emotionally direct soloist. Even when notes started to spill from the horn during “Tenor Madness,” Richmond communicated with the audience and kept in touch with the rhythm section's every change in direction. He started off “Along Came Betty” by echoing the last four notes of [John] Hart's solo. Bright singing melodies yielded to low earthy tones, and he resolved extended lines with ease.

"Saxophonist John Richmond was one of the most promising young voices on his instrument when he emerged in the eighties playing with the bands of bassist Ray Drummond and drummer Alvin Queen. In his own groups featuring the likes of Kenny Kirkland, Mulgrew Miller and Jeff "Tain" Watts the horn man also revealed a burgeoning ability as a leader and composer. Now with his return to the New York scene after a hiatus of more than a decade Richmond seems poised to deliver on the promise of his early days." —Russ Musto, All About Jazz 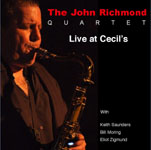 All About Jazz musician pages are maintained by musicians, publicists and trusted members like you. Interested? Tell us why you would like to improve the John Richmond musician page.