John Hartford won Grammy awards in three different decades, recorded a catalog of more than 30 albums, and wrote one of the most popular songs of all time, Gentle On My Mind. He was a regular guest and contributor on the Glen Campbell Good Time Hour and the Smothers Brothers Show. He added music and narration to Ken Burns’ landmark Civil War series, and was an integral part of the hugely popular "O Brother, Where Art Thou?" soundtrack and Down From The Mountain concert tour. But that hardly explains John Hartford.

Born John Cowan Harford in New York on December 30, 1937, John grew up in St. Louis. He was a descendent of Patrick Henry and cousin of Tennessee Williams. His grandfather was a founder of the Missouri Bar Association and his father was a prominent doctor.

At an early age, John fell in love with two things: music and the Mississippi River.

They were passions that would last his lifetime, and their pursuit would be his life’s passage.

In 1965 he moved to Nashville. The following year he was signed to RCA Records by the legendary Chet Atkins. It was Atkins who convinced John to add a "t" to his last name, becoming John Hartford. In 1967 his second RCA release "Earthwords & Music" featured the single "Gentle on My Mind", a song Hartford wrote after seeing the movie Dr. Zhivago. That year, the song earned four Grammy awards. Hartford would take home two awards, one as the writer and one for his own recording of the song. The other two went to Glen Campbell who had heard Hartford’s version on the radio and decided to record it. Campbell’s rendition became an instant classic, and the song became one of the most recorded and performed songs of all time, covered by everyone from Elvis Presley to Aretha Franklin.

Hartford often said that Gentle On My Mind bought his freedom.

He used that freedom to explore his various creative curiosities, and was usually happy to take his friends along on the trip.

In 1968 John Hartford left Nashville for Los Angeles, where he played on the Byrds’ classic album, Sweethearts of the Rodeo. He became a regular guest and contributor on CBS's Smothers Brothers Comedy Hour and later on The Glen Campbell Goodtime Hour. He would also earn his riverboat pilot's license by the end of the decade.

John Hartford became mentor and mystic for a generation of pickers, singers, and songwriters. His landmark record, Aereo-plain (1971) documented his work with Vassar Clements, Norman Blake, and Tut Taylor. Rooted firmly in tradition but sprouting at the top with hippie hair, the group’s instrumental mastery and free-wheeling style bridged a musical gap between traditional bluegrass and a progressive new audience, making every song a cult favorite and every live performance the thing of legend. According to Sam Bush, "Without Aereo-plain, there would be no ‘newgrass’ music."

In 1976, John won another Grammy award for his contemporary folk masterpiece, Mark Twang. The album featured a set of quirky river-centric original songs, presented in stripped down arrangements, typically featuring only Hartford accompanying himself on banjo, fiddle, or guitar while tapping his feet on an amplified sheet of plywood. The combination was magical, and would become his trademark sound for many years as a solo act.

Summer days might find him piloting the Julia Belle Swain on her afternoon run, before entertaining the passengers at night. During festival season, his amazing instinct for single-handedly captivating an audience would often have him leaving the stage and leading a processional of joyful dancers through the grounds, like a fiddle-playing pied piper.

Later in his career, he would revisit different ensemble configurations, recording and touring with his son, Jamie, and with various incarnations of the John Hartford String Band.

At his house overlooking the Cumberland River, John continued to write, record, and fill his hours with music. Already a published author ("Steamboat in a Cornfield" and "Word Movies"), Hartford also developed an extensive manuscript on the life and music of fiddler, Ed Haley.

In 2001, he was awarded a Grammy award for his contribution to the soundtrack of "O Brother Where Art Thou". His bittersweet appearance on the subsequent "Down From The Mountain" tour was immortalized in the concert film. He died on June 4, 2001, after a long battle with non-hodgkin’s lymphoma. Show less 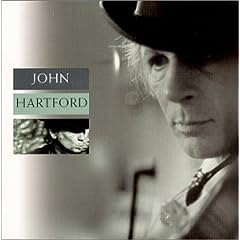 All About Jazz musician pages are maintained by musicians, publicists and trusted members like you. Interested? Tell us why you would like to improve the John Hartford musician page.