Prior to releasing four albums of his own original music, composer/arranger John Evans had been best known for his work with saxophonist David Sanborn on the RIAA certified gold, Grammy-nominated album, HIDEAWAY. Evans composed and co-penned with Sanborn, the tune that became the single release for the album.

This past year, Evans released three successful music videos. One of them, “All I Wanna' Do is Dance” has already received over one million views on YouTube.

Here's what Jackie Anderson - Host of Midday Jazz on WJAB-FM Radio, said about John Evans & Dream's first album: “You can feel the magic from start to finish with “DREAM”. Smooth jazz at its finest. Don't miss this one.”

In 2007, shortly after its' release, Evans' DREAM album made it to the number one slot for all genres at CD Baby. The album then remained in the top 10 of Best Selling Smooth Jazz albums for over 125 weeks.

“I've been listening to Dream, a lovely recording based on the music of the gifted American composer John Evans. Mr. Evans obviously has an ear for lyrical lines and many of his songs are extended in these instrumental versions. The arrangements are subtle and colorful. The playing is first rate throughout. For this listener (a classical musician) Mr. Evans seems to have learned lessons from several major composers: Debussy comes to mind first. My particular favorite cut is “Para Bailar” with its Latin edge. Each selection has a catchy groove and there is enough variety between the five compositions to satisfy any listener whether he be from the pop or classical worlds.”

Born in New York City, Evans started piano lessons at age four. A few years later, John saw the movie “The Benny Goodman Story” and was inspired to learn how to play the clarinet. He went to the school band teacher hoping to check out a clarinet, but, as luck would have it, everyone else had seen the movie the day before and there were no more clarinets. The band teacher told John that they only had one alto sax left, so John started playing alto. In the sixth grade, he switched to tenor sax and continued playing tenor for nearly twenty years. While attending Phillips University, Evans played in a popular R&B horn band called The Preachers. After returning to New York City, he studied tenor with the late, great, Clifford Jordan.

Evans served in the US Army with a tour in South Korea as an entertainment specialist, booking USO shows, playing in combos and doing shows for the troops in isolated areas. He started showing an interest in the electric bass. Completing his tour of duty, he returned to New York (1970), he continued freelancing on tenor.

Finding it difficult to earn a good living playing tenor in Manhattan, Evans switched to electric bass and almost immediately was working full-time. Prior to becoming a free-lance recording musician, John held the bass chair for a series of shows on Broadway...The Original Godspell...The Magic Show with Doug Henning...Evita...and some lesser known shows.

With his studies turning to composition and arranging, Evans, once again, focussed his attention on developing his piano skills. He has composed, arranged and produced music for Sports Illustrated and Time Life.

Worked with David Sanborn on the RIAA, Certified Gold, Grammy Nominated, ”Hideaway” album. Evans composed and co-penned “Creeper” with Sanborn. It was the tune that became the single release from the album.

Formed The John Evans Band. They were fortunate enough to be one of the New York bands that often played at Mikell's, a well-known musicians' hang- out at that time. Hiram Bullock, Paul Shaffer, Steve Jordan, Clifford Carter, Doane Perry, Lou Volpe and other session musicians were, at times, a part of the band.

Moved to Los Angeles, were he worked with Elliott Randall, Cornell Dupree, Jeff Baxter, Tom Pierson's Big Band and a host of others.

Evans lives in Texas with his wife, writer and lyricist, Sandy Evans.

John Evans is widely known by his collaboration with David Sanborn on his album Hideaway. Evans composed and co- penned Creeper with Sanborn. Last year I reviewed his album The Winding Road (2009).

Now he is back with his new album Postcard from the Moon (2010). All songs are composed and arranged by John Evans.

John Evans is widely known by his collaboration with David Sanborn on his album Hideaway. Evans composed and co- penned Creeper with Sanborn. Last year I reviewed his album The Winding Road (2009).

Now he is back with his new album Postcard from the Moon (2010). All songs are composed and arranged by John Evans.

The album starts with the ballad You Never Taught Me How To Say Goodbye. The heartfelt song about the loss of a beloved person features lovely singer Jennifer Perryman. The horn arrangement borrows from Earth, Wind & Fire, the vocal arrangement from the Carpenters, a delightful mixture.

Sloppy Joe's touches the Latin string. Excellent the rhythm section and especially Larry Spencer on trumpet. Emilio reminds me of Harry Bellafonte's Island In The Sun. Yes, that is the swing of the '50's and still standing the test of time.

On Bronx Blue you can listen to heavy blues intonations with Ron Jones on featured tenor sax and Andy Timmons on guitar. Walking along 7th Avenue we arrived contemporary jazz with jazz rock elements.

Postcard From The Moon presents the terrific singer Rosana Eckert, who perfectly fits into the horn arrangement. Really impressive.

Composer/arranger John Evans has been a master of smooth jazz for some 30 years, since he helped escort veteran saxophonist David Sanborn to RIAA gold with the composition “Creeper.” His previous solo release “Dream,” was an unqualified smash, where it topped the CD Baby sales chart in 2007 and remained in the top 10 of its Smooth Jazz Album chart for more than two years.

Sophomore CD “The Winding Road” on Studio Records LLC, again aligns Evans with his ensemble Dream, and keeps the genre’s fires burning -”if cool to the touch”- with a six-track triptych of gently swaying melodic embers. Among the set’s most virtuous qualities is its attention to nuance and diversity in the arrangements. Album opener “Easy Love” adds a touch of harmonic vocals - courtesy of Rosana Eckert and Annagrey Labasse - to a pleasingly swaying percussive backdrop, a la playful 1960’s Herb Alpert; while “In A Gentle Way” is full-on radio-ready smooth jazz, calming and genial. Both tracks showcase Larry Spencer on flugelhorn and Ron Jones on soprano sax. Meanwhile, “Love Will Find A Way” features a sonic serenade from Jones and Larry Spencer on trumpet, interacting with one another like teasing inamorata; and “I Was A Fool,” composed by Evans, with lyrics by his wife Sandy, offers a full vocal performance that accompanies a sensual melody line including drummer Mike Collier and Jennifer Perryman with Jones on sax. “Tight Squeeze,” a highlight of “The Winding Road,” tosses a bossa nova vibe into the mix, with a Latin-infused arrangement that offers Jones an opportunity to shine on flute, with Spencer on horns. The title track closes the album like a luminescent mid-summer sunset: beautiful, calming and gentle on the senses.

Evans’ “Road” is destined to be traveled again and again. With each journey, listeners are sure to see new sites and hear new sounds. Just exceptional.

“With his second album The Winding Road, John Evans chose his own way to melodic music, always more downtempo and with stronger emphasis on melody than urban rhythm.” 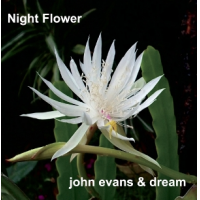 Postcard from the Moon 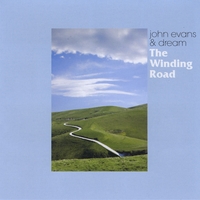 From: Night Flower
By John Evans and Dream

From: Postcard from the Moon
By John Evans and Dream

Postcard from the Moon

From: Postcard from the Moon
By John Evans and Dream

All About Jazz musician pages are maintained by musicians, publicists and trusted members like you. Interested? Tell us why you would like to improve the John Evans and Dream musician page.