Joe Falcey, a N.J. native, has been performing music in the U.S. and internationally for the last 20 years. He holds a degree in Music from Kean University where he studied performance, composition, and music education. He has also studied privately under master drummers Dave McGraw, Tony DeNicola (Harry James) Joe Morello (Dave Brubeck) and Ari Hoenig (Kenny Werner, Joe Lovano & Mike Stern).

He has maintained busy performance schedule as both a leader and a sideman, along with a full time teaching schedule previously as half owner of Smith’s Music Studios.

Currently Joe continues to instruct on both drum set and piano at his residence in New Jersey. He held the drum chair in the original project, Ocean Exposition (OE) which toured the east coast extensively from 2000-2004. OE was led by guitarist Tim Conley along with close friends Jason Fraticelli, bassist and Jon Thompson, saxophonist. Joe contunues to perform with OE menbers in various projects in the greater Philadelphia area. Most recently Joe joined forces with The Puzzlebox Experiment.

Also, Joe has been playing and recording with the original rock band, The Happy Dog featutring Jesse Wagner on vocals & guitar, Keith Snyder on bass and John Stenger or Glenn McClelland on keyboards with frequent guests Jon Thompson on sax & gutiar and Andy Keenan on pedal steel and guitar.

Joe also performs with saxophonist Dan Peterson's group Truth & Consequence, an original, jazz influened ensemble featuring Matt Davis, guitar; Michael Tayor, bass; Behn Gillice, vibes; Larry Toft, trombone; Bart Miltenberger, trumpet; Scott McDonald, percussion. Joe also enjoys performing with what has become known as The Underground Sextet. The group began as a quartet featuring Tom Pass on Hammond Organ; Michael Remoli on guitar and Dominic DeFranco on saxophone. It has since expanded to include Danny Tobias on cornet & trumpet & Joe McDonough on trombone and performs a wide variety of material from the Great American Song Book as well as many original compostions and arrangements written by members of the group. 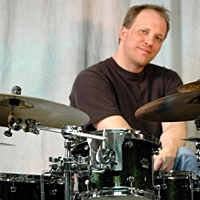 All About Jazz musician pages are maintained by musicians, publicists and trusted members like you. Interested? Tell us why you would like to improve the Joe Falcey musician page.