If you were to list all the groups Jimmy Madison has worked with since his arrival in New York, it would read like a Who’s Who of modern music. A musician at four years, and a professional at age twelve, he has been playing jazz all his life. Leaving Cincinnati to join Miami trumpeter Don Goldie at age 19, he was quickly hired by bandleader Lionel Hampton after a gig at New York’s world-famous Metropole. Since then, he has performed and recorded with such diverse musical stylists as Marion McPartland, Bobby Hackett, James Brown, Gerry Mulligan, Nina Simone, Al Cohn, Rahsaan Roland Kirk, Joe Farrell, George Benson, Richie Havens, Stan Getz, Hubert Laws ,Lee Konitz, Anita O’Day, Art Farmer, John Lewis, Ray Baretto, Shirley MacLaine, Maceo Parker, Ron Carter, Jon Hendricks, The Joffrey Ballet, Chet Baker, David Berger, Quincy Jones, Toots Theilmans and The Duke Ellington Orchestra, to name only a few.

Honing the skills needed to accompany all the various types of music played or sung or danced by the artists listed above has given Jimmy a rich appreciation for all music. His work as a teacher/clinician has broadened that appreciation even more.

Although Jimmy has led groups on several occasions, including an 18-piece big band with composer Angel Rangelov, he is mostly known as a sideman, having long been featured at jazz venues internationally. Once, in a review of the Red Rodney Quintet’s appearance at NYC’s Blue Note, Gary Giddens of the Village Voice called Jimmy “the best kept secret in jazz.”

“...one of the most gifted, sensitive and brilliant musicians I ever worked with...” —David Amram

“I love playing with Jimmy because he is so musical.” —Red Rodney

“All the while, the steady steady white boy on the drums, Jimmy Madison, pulls everything in together

”The best kept secret in jazz.” —The Village Voice

“...one of the most gifted, sensitive and brilliant musicians I ever worked with...” —David Amram

“I love playing with Jimmy because he is so musical.” —Red Rodney

“All the while, the steady steady white boy on the drums, Jimmy Madison, pulls everything in together. He makes sense of it and carries the crowd along. He makes sure no one gets lost.” —John LaRoe 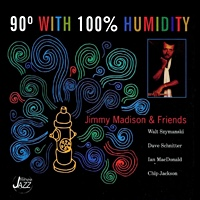 All About Jazz musician pages are maintained by musicians, publicists and trusted members like you. Interested? Tell us why you would like to improve the Jimmy Madison musician page.