Jim Hagen (guitar) hails from Kansas City, where he started learning guitar at the age of 10. He studied classical guitar at Penn Valley College and the Kansas City Conservatory of Music. His band, Prophet, opened for some major recording artists, including John Kay and Steppenwolf, Jeff Berlin, and Bill Bruford of Yes.

He moved to California in the 1980s and formed a new group called Arroyo Culture, which played numerous clubs in Hollywood and Los Angeles. The band released a CD on Partly Dave Records and was featured in College Music Journal and local radio. During this time, Hagen continued to study classical guitar with Robert Vaught and jazz guitar with Ron Anthony, guitarist for Frank Sinatra, and Riner Scivally.

From: Jazzical
By Jim Hagen

From: Jazzical
By Jim Hagen 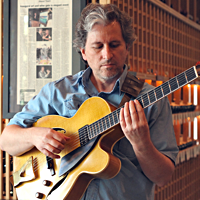 All About Jazz musician pages are maintained by musicians, publicists and trusted members like you. Interested? Tell us why you would like to improve the Jim Hagen musician page.