Jay grew up in Meriden, Connecticut in a family whose musical diet primarily consisted of Frank Sinatra, Jack Jones, The Beatles and every other British rock group. At age seven, Jay began taking trumpet lessons from his dad (along with a few years of piano). At around eleven, he got his hands on a harmony guitar from his dad's music store and gradually made the Jay's Guitarswitch from brass to strings. After high school, Jay spent a year at the Hartt School Of Music studying classical guitar with Alan Spriestersbach and Dick Provost before moving to Boston and attending the Berklee College Of Music. While in Boston, Jay had the good fortune of studying with Mick Goodrick, Charlie Banacos and Pat Metheny.

After leaving Boston in 1981, Jay moved to New York and entered a multitude of musical settings. His first gig in New York was with violinist Michael Urbaniak, ushering in the next several years of playing fusion music. During this time Jay worked and recorded with Harvie Swartz, and later Spyro Gyra, which earned him a Grammy nomination. In 1989, Jay recorded his first CD as a leader entitled Never Too Late, produced by Teo Macero on Antilles New Directions. During this time, the versatile guitarist was also working and recording with artists such as Dave Samuels, Kenny Werner, Fred Hersch, Jeff Beal, David Mann, Ron McClure, Herbie Mann, Chuck Mangione, Jerry Bergonzi, Marc Copeland and singers Michael Franks, Donna Summer, The Manhattan Transfer, Carly Simon and Rickie Lee Jones.

In 1995, Jay received a Masters of fine arts degree from the Conservatory Of Music at Purchase, NY. During this time he studied composition with Edgar Grana and began teaching at the Conservatory as well as at Manhattanville College.

In 1997, Jay became a member of the John Patitucci band. This group afforded Jay the opportunity to play more expansive music in the acoustic jazz setting. The groups that John put together for tours were always great, especially the one in Mexico City which included Chris Potter and Adam Nussbaum. In January of 2000, Jay recorded his second CD entitled Past Tense on Doubletime Records, which included performances by Patitucci, Potter, and Nussbaum, along with pianist Charles Blenzig and singers Jill Azzolina and Julie Eigenberg. This recording of seven original songs was produced by both Azzolina and Patitucci, marking a new period of playing and writing for Jay.

After a busy year of performing, writing and teaching closer to home, Jay's new compositions have been captured on his latest recording, Local Dialect. On this new project for Garagista Music, the celebrated guitarist does something he's never done on any previous release: Rather than concentrate on one particular genre or theme, he decided to open the doors of his imagination and let the music dictate where it would go. Recorded over the space of a few days at The Cutting Room and Quad Studios in Manhattan, Local Dialect benefits from Janko Radosavljevic's street-smart sonic conception. With his double-barreled background in jazz and hip-hop, the Yugoslavian-born producer invests Azzolina's performances with an urgent, immediate presence.

Also available is Jay Azzolina Live at One Station Plaza, a gig recorded in Peekskill, New York. Adam Nussbaum is featured on drums along with B-3 organist Gary Versace. This recording revisits the classic organ trio with a twist of the unpredictable.

Commenting on his latest recording, Local Dialect, Azzolina states, "This is honest material, it came from me, and it's who I am at this point in my life. That's what matters to me now as a musician, more than anything else." Show less 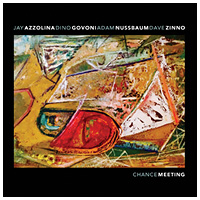 Live at One Station...

From: Hiding Out
By Jay Azzolina

All About Jazz musician pages are maintained by musicians, publicists and trusted members like you. Interested? Tell us why you would like to improve the Tim Miller musician page.