American jazz pianist, arranger and composer born in Romania. Korossy is the first who combined the Romanian folklore music with American jazz rhythms ,and the creator of the "free style" in Romanian jazz, but he is also the one who arranged in jazz and performed worldwide "The Rhapsody no.1" written by great George Enescu.

Jancy Korossy it was considered "the most authentic jazz pianist in Europe" (according to famous jazz promoter Willis Connover), and is up until nowadays considered and undeniable as the most valuable and unrivaled jazz musician coming from Romania.

2006 - Awarded with the highest distinction, as a "Comandor" by the President of Romania, as a recognition for the special achievements in promoting the Romanian culture abroad, and the unique developments of folclorique music in jazz.

2002 - Awarded with the prize of "The most valuable musician from diaspora", by the National Radio of Romania.

1975 - Awarded by President Jimmy Carter, with the distinction as a "Lieutenant Governor's award of Excellence" for extraordinary cultural merit in jazz music. 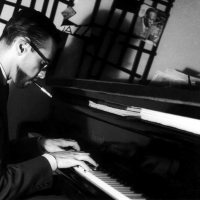 All About Jazz musician pages are maintained by musicians, publicists and trusted members like you. Interested? Tell us why you would like to improve the Jancy Korossy musician page.