Jan Rivera is a graduate from both the A.A. and bachelor’s programs (Electric Guitar Performance – Contemporary Styles) at Musicians Institute in Los Angeles, CA; where he studied with Alex Machacek, Antti Kotikoski, Chris Juergensen, Greg Howe, Scott Henderson, and also worked as a Teaching Assistant.

He was born and raised in Puerto Rico, where he started his formal education by obtaining a B.M. in Musical Education and a B.A. in Music (Classical Guitar) from the Universidad Interamericana of Puerto Rico, San German Campus. He also finished all coursework for a Masters in Music Education before moving to Los Angeles, where he still resides.

His book “Advanced Rhythmic Concepts for Guitar; Foreword by Alex Machacek: (An in-depth study on Metric Modulation, Polyrhythms and Polymeters)” reached the 2014 Abstract Logix top sellers list, and placed #1 in its category for best sellers at Amazon.com. It has also received raving reviews by publications the likes of JazzTimes Magazine, Vintage Guitar Magazine,fellow authors (Mel Bay/Hal Leonard), educators (Musicians Institute, Berklee College of Music, and the Tokyo School of Music), as well as other musicians. It has been cited in several books around the world, and used as a resource in music bachelor programs.

Jan has worked as an on-set consultant, curriculum designer and writer for Fender Guitars, and taught and performed clinics with Guitar Workshop Plus. A guitar camp that regularly features guest artists like Tosin Abasi, Paul Gilbert, Albert Lee, Gary Hoey, and Andy McKee.

"...Some of the exercises here, while smartly explained and harmonically barebones, make Mahavishnu Orchestra seem like ZZ Top..." -JazzTimes Magazine

"Jan Rivera's book is clear, thorough, and methodical, and will be an asset to anyone wishing to improve in the area of rhythm

"...Some of the exercises here, while smartly explained and harmonically barebones, make Mahavishnu Orchestra seem like ZZ Top..." -JazzTimes Magazine

"Jan Rivera's book is clear, thorough, and methodical, and will be an asset to anyone wishing to improve in the area of rhythm. Having the fluency to freely play with polyrhythms and polymeters is a valuable skill for the modern improviser, and careful study of this book will provide the student with the tools needed to achieve this."
– BEN MONDER (solo artist, Miguel Zenón)

"Guitarist Jan Rivera has produced a thorough, easy to understand guide to metric modulation that will be very useful to any serious musician. There are hundreds of examples in this book illustrating and breaking down rhythmic concepts in pragmatic ways that will make their applications possible. Highly recommended".
- JOHN STOWELL

"Rhythm is such an important and under nourished aspect of playing and studying music. Jan Rivera has come up with an informative, challenging and clear concept for understanding and using complex rhythms. The book is called "Advanced Rhythmic Concepts For Guitar", but I really feel that this book will benefit any musician; no matter what instrument they play. Just the Ratio Polyrhythms section is a great help in organizing one's thinking about that difficult subject. I highly recommend this book for anyone who is serious about improving their overall knowledge of how rhythms work and more importantly how to use them effectively."
-DEAN BROWN (Brecker Brothers, Herbie Hancock, DB3 w/ Victor Wooten and Dennis Chambers)

"Jan Rivera's "Advanced Rhythmic Concepts for Guitar" book will definitely take your rhythm chops to a higher level. The studies are interesting, original, and in-depth. This book is definitely an essential item in any serious guitarist's library. I'm glad I already have my copy!"
–GUSTAVO ASSIS-BRASIL (Author: Hybrid Picking Lines and Licks for Guitar: Foreword by Guthrie Govan)

Although there are countless of guitar books on the market relating to scales, modes, theory and licks, I can’t recall even one book that covers the topic of rhythm, much less polyrhythms. We guitarists are infamous for our total lack of rhythmic skills so I definitely suggest this book if you want to set yourself apart from the competition. It is well written and easy to understand, and I plan to dedicate part of my practice time to the exercises in the chapters. Thanks for putting this together Jan!
–CHRIS JUERGENSEN (solo artist, Vice-Principal Tokyo School of Music, Author: The Infinite Guitar)

"A sophisticated rhythmic interplay is expected from the modern improviser. Finally here is a book for guitarists who want to advance in their approach to rhythm. This book is beautifully laid out visually and very straight forward intellectually, presenting the information in easy to digest morsels. The cover art is inviting; it makes you want to look inside. And it’s not just for guitarists."
–SID JACOBS (solo artist, Author: Mel Bay's Complete Book of Jazz Guitar| Modern Jazz Concepts for Guitar [Hal Leonard] ) 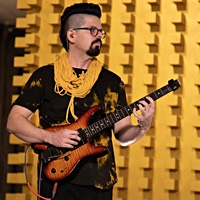 All About Jazz musician pages are maintained by musicians, publicists and trusted members like you. Interested? Tell us why you would like to improve the Jan Rivera musician page.