Although he has had a long and productive career, Jack Nimitz has long been underrated, not getting a chance to lead his own record session until a 1995 set for Fresh Sound, when he was already 65.

He started on the clarinet when he was 12, switching to alto two years later, and gigging locally at 15. In 1949, Nimitz started specializing on the baritone and soon was playing with such territory bands as those led by Bob Astor, Johnny Bothwell, and Daryl Harpa. 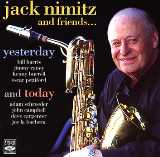 All About Jazz musician pages are maintained by musicians, publicists and trusted members like you. Interested? Tell us why you would like to improve the Jack Nimitz musician page.