Born in Vienna as the son of a teacher, Gulda began learning to play the piano from Felix Pazofsky at the Wiener Volkskonservatorium, aged 7. In 1942, he entered the Vienna Music Academy, where he studied piano and musical theory under Bruno Seidlhofer and Joseph Marx.

He won first prize at the Geneva International Music Competition in 1946. Initially, the jury preferred the Belgian pianist Lode Backx, but when the final vote was taken, Gulda was the winner. One of the jurors, Eileen Joyce, who favoured Backx, stormed out and claimed the other jurors were unfairly influenced by Gulda's supporters.[1] Gulda began to play concerts worldwide. He made his Carnegie Hall debut in 1950.[2] Together with Jörg Demus and Paul Badura-Skoda, Gulda formed what became known as the “Viennese troika”.

Although most famous for his Mozart and Beethoven interpretations, Gulda also performed the music of J. S. Bach (often on clavichord), Schubert, Chopin, Schumann, Debussy and Ravel.

From the 1950s on he cultivated an interest in jazz, writing several songs and instrumental pieces, and at times combining jazz and classical music in his concerts. In 1956, he performed at Birdland in New York City[3] and at the Newport Jazz Festival.[2] He organized the International Competition for Modern Jazz in 1966,[4] and he established the International Musikforum, a school for students who wanted to learn improvisation, in Ossiach, Austria, in 1968.[5] He once said:[6]

There can be no guarantee that I will become a great jazz musician, but at least I shall know that I am doing the right thing. I don't want to fall into the routine of the modern concert pianist's life, nor do I want to ride the cheap triumphs of the Baroque bandwagon.

In jazz, he found “the rhythmic drive, the risk, the absolute contrast to the pale, academic approach I had been taught.”[6] He also took up playing the baritone saxophone.[4]

Gulda wrote a Prelude and Fugue with a theme suggesting swing. Keith Emerson performed it on Emerson, Lake & Palmer's The Return of the Manticore. In addition, Gulda composed “Variations on The Doors' 'Light My Fire'”. Another version can be found on Gulda's album As You Like It (1970), an album with standards such as “'Round Midnight” and “What Is This Thing Called Love?”. In 1980, he wrote his Concerto for Cello and Wind Orchestra, which has been called “as moving as it is lighthearted”, in five movements “involving jazz, a minuet, rock, a smidgen of polka, a march and a cadenza with two spots where a star cellist must improvise.”[7]

In 1982, Gulda teamed up with jazz pianist Chick Corea, who was between the breakup of Return to Forever and the formation of his Elektric Band. Issued on The Meeting (Philips, 1984), Gulda and Corea communicate in lengthy improvisations mixing jazz (”Some Day My Prince Will Come” and the lesser known Miles Davis song “Put Your Foot Out”) and classical music (Brahms' “Wiegenlied” [”Cradle song”]). In the late 1990s, Gulda organised rave parties, where he performed with the support of several DJs and Go-Go dancers.

These unorthodox practices along with his refusal to follow clothing conventions or announce the program of his concerts in advance earned him the nickname “terrorist pianist”.[2] In 1988, he cancelled a performance after officials of the Salzburg Festival objected to his including jazz musician Joe Zawinul on the program.[2] When the Vienna Music Academy awarded him its Beethoven Ring in recognition of his performances, he accepted it but then reconsidered and returned it.[5] To promote a concert in 1999, he announced his own death in a press release so that the concert at the Vienna Konzerthaus could serve as a resurrection party.[5]

Gulda is widely regarded[weasel words] as one of the most outstanding piano players of the 20th century. His piano students included Martha Argerich, who called Gulda “my most important influence,”[8] and the conductor Claudio Abbado.[9]

He expressed a wish to die on the birthday of Mozart,[citation needed] the composer he most adored, and did so. He died of heart failure at the age of 69 on 27 January 2000 at his home in Weissenbach, Austria.[5] Gulda is buried in the cemetery of Steinbach am Attersee, Austria.

He was married twice, first to Paola Loew and then to Yuko Wakiyama. Two of his three sons, Paul and Rico Gulda, one from each of his marriages, are accomplished pianists.

A documentary film made for television in 2007, So what?! - Friedrich Gulda, tells his life story. 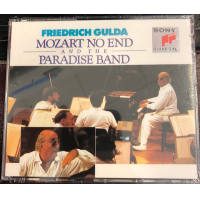 Mozart No End And The...

All About Jazz musician pages are maintained by musicians, publicists and trusted members like you. Interested? Tell us why you would like to improve the Friedrich Gulda musician page.