Born in Milan, Francesco Di Lenge started studying drums at the age of 16 with Bruno Fraimini. He started to move his first steps in the professional career in the early 90’working with several musicians (ranging from rock to jazz, latin and funk) of the “Milanese” area performing in many clubs (Capolinea, Scimmie, Tangram, etc..) and venues around italy and abroad, also appearing in few tv programs.

In 1996 after achieving a scholarship, he moves to the U.S.A. to attend BERKLEE College of Music. During four years of staying he has collaborated with SKRAP, ska reggae band of the eastcoast (touring in several places around the states) and CATCH BETTY popular rock band from Boston.

Berklee has been very important for his musical education, he studied with drummers such as KENWOOD DENNARD, CASEY SCHEUERELL, ED URIBE, STEVE WILKES, JAMEY HADDAD and many others.

In the year 2000 he moved back to Italy where he begun to work for C.E.M.M. as a drum teacher, starting a collaboration with BIAGIO COPPA and W. donatiello of the FREEFLY quartet, latest band of the renowned drummer from the band AREA, GIULIO CAPIOZZO.

In 2002 he started working at his first solo project Migrations, 45 minutes of music,a mixture of sounds and genres , obtaining a good feed back from the press. Right after the recording of his solo project he started a new collaboration with Pinocchio sound project, a tribute to the music of the amazing quintet of Miles Davis and Wayne Shorter. The Line Up: Biagio Coppa sax, Luigi Ranghino piano, and Attilio Zanchi double bass. In 2003 a new collaboration with Dodi Battaglia (POOH) for his new solo CD. In 2004 he performes in many jazz festival With JazzUp4tet, Zanchi Ferrari DiLenge trio and Fluxus Quartet (Signorino, Carcano, Orsi, Di lenge).

In 2005 he starts a very challenging collaboration with Alessandro Bianchi and Maurizio Signorino working for original projects by Teresa Pomodoro and NOHMA.

In 2008 recording of Beat light, produced and distributed worldwide by Music Center Italy.

In 2009 he recorded with C.O.D. trio, We will rock you we will jazz you we will mock you, the basic idea of the project is to “re-build” the musical background of some of the melodies which characterised the “classic rock”, imagining alternatives situations and scenarios. The particular and also hybrid line up, sax-guitar-drums, and the mixture of jazz, european avant-garde and progressive rock, make this work of reinventing the tunes even more convincing, which is also strengthened by the choice of the “victims” such as Police, Led Zeppelin, Pink Floyd, Doors and more. 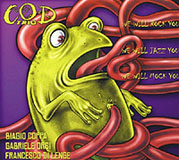 We Will Rock You

From: we will rock you, we will jazz...
By Francesco Di Lenge

All About Jazz musician pages are maintained by musicians, publicists and trusted members like you. Interested? Tell us why you would like to improve the Francesco Di Lenge musician page.