FIVE PLAY, the sister group of the world-renowned DIVA Jazz Orchestra, was formed in 1999. The quintet is comprised of the large ensemble's rhythm section and two of its foremost soloists.

FIVE PLAY is rooted in the jazz tradition and is fueled and inspired by the members' collective, creative vision to swing through the 21st Century. The quintet's repertoire is comprised of innovative arrangements of classic and contemporary standards, as well as original music composed and arranged by band members. The group's library was conceived to highlight the distinctive styles of each individual and to create a unique, fresh, exciting and powerful ensemble sound.

FIVE PLAY has performed at many of the most prestigious concert halls, music festivals, universities and jazz clubs in the United States, including Carnegie Hall and The Kennedy Center. The group has also performed at major festivals in Israel, Japan, France, Germany, Spain and Portugal. In 2004 the quintet and its members were highly ranked in Downbeat Magazine's Annual Readers' Poll.

Read more articles
”What these women bring to the table is a finely tuned sense of democracy, style, purpose, and full intent to swing. Their equality and balance is in evidence right off the bat.” —Michael Nastos, AllAboutJazz 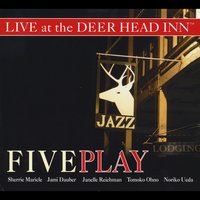 All About Jazz musician pages are maintained by musicians, publicists and trusted members like you. Interested? Tell us why you would like to improve the Five Play musician page.