Driven by the dynamic interplay between Fabrizio Sotti's colorful electric and acoustic guitar and Sam Barsh's bluesy Hammond B-3 organ, the Italian born artist/composer's highly anticipated E1 Music debut Inner Dance beautifully recalls the spirit of the mid-60s albums by his guitar hero Wes Montgomery and organ great Jimmy Smith. As inspired as the recording sounds, it may surprise longtime Sotti fans--and jazz guitar enthusiasts new to his multi-faceted vibe--that he originally conceived his first solo album since 2004's Through My Eyes as a more traditional trio project. In a true sign of these technologically advanced times that Montgomery could never have fathomed, it was a computer hard drive failure- and the complete loss of the album's original sessions-that gave rise to one of the most compelling jazz recordings of the year.

The fascinating story of how the ultimate version of Inner Dance came to be led Sotti for a time to use the working title "Against All Odds." He began recording the nine track collection in February 2009 with veteran bassist James Genus and renowned drummer/percussionist Mino Cinelu. Sotti had worked with Genus various times over the years and Genus appeared on the guitarist's 1999 recording This World Upside Down, his first major release in the U.S. that also featured John Patitucci, Randy and Michael Brecker, Al Foster and Victor Jones. After recording the basic trio tracks for Inner Dance, and others featuring Swiss harmonica great Gregoire Maret and Chilean vocalist Claudia Acuña, Sotti's hard drive crashed and he lost all the recordings.

"The tech company that tried to salvage my data told me that this kind of complete erasure only happens once in every 10,000 times a computer crashes," Sotti says. "I was frustrated but quickly decided to press on and start scheduling new sessions. But when you're working with busy musicians, it's hard to find time in their schedules to rebook them. Since James was not available for the new sessions that started in April, I brought in Sam, who created the bass sound on the B- 3. Inner Dance developed into a whole new and very exciting project featuring my guitar and the organ that sounded like those classic organ trio albums I grew up with. The organ has a fuller sound and can create bass and harmony at the same time, so I think the tracks are more accessible to listeners, whether they are big jazz fans or not. And we were fortunate to keep Claudia, who adds a wonderful Spanish vocal to 'Amancer,' and Gregoire, who adds his lovely harmonica to the title track."

Inner Dance, whose title reflects Sotti's spiritual and emotional journey back to making a jazz album after several years, begins with the hypnotic and moody, sparsely arranged "Blue Whisper," a track that showcases his electric guitar prowess over a swinging organ trio groove. Shifting gears, Sotti displays a Spanish styled acoustic grace on the seductive "Kindness In Your Eyes" before switching back to the electric for the synth and harmonica laced title track-which rolls like an easy swaying waltz with bluesy touches thanks to the B-3. Sotti kicks up a notch on the percussive and swinging "I Thought So," which includes a hard hitting drum/organ jam behind the soaring, spirited guitar melody.Claudia Acuna's soulful Spanish vocals add lushness and depth to the sweetly ambient "Amancer," while the thoughtful meditation "Brief Talk" is a loving tribute to Michael Brecker inspired by Sotti's last encounter with the sax legend before his untimely death in 2007. "Last Chance" is a high energy blast with Sotti's crisp bluesy guitar swinging mightily over Barsh's bubbly organ harmony and a jazz-funk percussion explosion. True to its title, the coolly swaggering "Mr. T.M" and its sensual guitar lines were inspired by another of Sotti's influences, Thelonious Monk. Inner Dance wraps with the gentle acoustic guitar coda "We Are What We Are."

Had the hard drive crash not necessitated a refashioning of the project, the story that newcomers to Sotti's music would have heard first is the unique duality of his career. Born in Padova, Italy in 1975, he was taking classical piano lessons by age five and switched to guitar at nine when his guiding musical lights switched from Bach and Chopin to Miles Davis, John Coltrane, Wes Montgomery and Jimi Hendrix. He originally moved to the U.S. shortly after releasing his debut album Looking For in his mid-teens, then came back to New York permanently to launch his jazz career after a brief stint in the mid-90s in the Italian Air Force.

Since the late 90s, Sotti's career has forged a fascinating dichotomy between working with some of today's top jazz musicians and writing and producing for superstar hip-hop and pop artists. On the jazz side, he continued his solo recording career with Standards and More and performed on and produced two albums for Grammy winning vocalist Cassandra Wilson, Glamoured (2003) and Closer To You: The Pop Side (2009). He has toured extensively in the U.S. and Europe and worked over the years with an impressive group of A-listers: Al Foster, Roy Hargrove, George Coleman, George Garzone, Steve La Spina, Sammy Figueroa, Mick Goodrick, Mark Egan, Mino Cinelu, Victor Jones, Rachel Z, Jeff "Tain" Watts, Cameron Brown, Andy LaVerne, Harvie Swartz, Brian Lynch, Mick Goodrick, Lincoln Goines, Rick Margitza, Clarence Penn and many more.

Expanding his musical palette into the lucrative and creatively fulfilling realm of hip-hop and R&B, Sotti has played with written and produced tracks for everyone from Dead Prez, Q- Tip, Tupac (a posthumous piece called "If I Fail"), Ghostface Killah, Jennifer Lopez, Whitney Houston, Killah Priest, Styles P, Hell Razah, Foxy Brown, Half Pint and The DEY. In 2006, he produced the album Confidential for an artist named M1 and released it on his own label Sotti Records to great commercial success.

"I agree with Duke Ellington in his assessment that there are only two kinds of music, good and bad, and I choose not to discriminate by genre," says Sotti. "I am truly a jazz musician by training and nature but I think what sets me apart from the typical jazz guy is that I also love writing and producing in other realms and do both in a professional way, giving my all and being true to both myself and the artists I work with. I had always been interested in the sound of hip hop and the way the artists and producers use so many different layers of sounds. Compared to pop and rock, producing hip-hop is much more creative and, as with jazz, I love having the freedom to choose different instruments and combine them in clever, exciting ways. Both styles even give me the space to choose awkward instrumentation if that's what I feel it will take to make the track sound great."

The word "freedom" comes up often when Sotti is discussing his unique and eclectic career and the joyful feeling he has about returning to the jazz world-with a 2009 European tour and the recording of Inner Dance-after a several year layoff. "The thing I love about my life now is really being free to dive into so many different projects and feel like I'm part of them in an authentic way," he says. I bring great passion and knowledge to my hip-hop work, but it's cool the way my jazz roots always come out. For someone like me who is a composer, guitarist and producer, it's nice to have the freedom to explore and live different lifestyles. The legend who set the trend in mixing styles like this is Miles Davis, who loved playing with pop artists in addition to the greatest jazz musicians in the world. He was way ahead of his time. In my own small way, I am simply trying to continue what he started. My roots are jazz but it's always nice to be open minded and embrace new opportunities as they arise." Show less

Guitarist Fabrizio Sotti Interviewed at All About Jazz

Guitarist-Composer Fabrizio Sotti to Perform at Blue Note on Monday,...

“With an abundance of infectious grooves and catchy hooks, Inner Dance proves to be a listener-friendly affair with Sotti staking claim as a guitarist with whom to be reckoned.” ​- John Barron, All About Jazz

“On [Inner Dance], Sotti shows great talent and technique on both amplified and acoustic guitars.” ​- Larry Taylor, All About Jazz

“On Inner Dance, Sotti does not refashion or rethink jazz. Rather, he creates accessible and cordial contemporary jazz material.” ​- Doug Simpson, Audiophile Audition

“Italian jazz-guitar hero Fabrizio Sotti may have been better known for his hip-hop productions rather than his own music, but that should change with the release ofInner Dance. For my money, Inner Dance definitely belongs in the “good” category.” ​- Greg Barbrick, Blogcritics.org

“With an abundance of infectious grooves and catchy hooks, Inner Dance proves to be a listener-friendly affair with Sotti staking claim as a guitarist with whom to be reckoned.” ​- John Barron, All About Jazz

“On [Inner Dance], Sotti shows great talent and technique on both amplified and acoustic guitars.” ​- Larry Taylor, All About Jazz

“On Inner Dance, Sotti does not refashion or rethink jazz. Rather, he creates accessible and cordial contemporary jazz material.” ​- Doug Simpson, Audiophile Audition

“Italian jazz-guitar hero Fabrizio Sotti may have been better known for his hip-hop productions rather than his own music, but that should change with the release ofInner Dance. For my money, Inner Dance definitely belongs in the “good” category.” ​- Greg Barbrick, Blogcritics.org

“I really cannot get this disc out of my CD changer. The Italian-born Sotti has released an album that touches on a number of styles without ever degenerating into a simple game of Name That Influence.” ​- Brian McCoy, The Examiner

“The album is a winner. I've listened to many jazz guitarists. By far, Fabrizio Sotti is the most elegant.” ​- Charles L. Latimer, I Dig Jazz.com

“A sassy romp strictly made for burning the blue lights in the basement and letting the smoke rise. A wonderful ride throughout.” ​- Chris Spector, Midwest Record

“Inner Dance is compositionally and artistically beyond the ordinary musically. This jewel is audibly contemporary in sound with homage paid to the forefathers in jazz without losing his vision artistic vocabulary.” ​- Rob Young, The Urban Flux 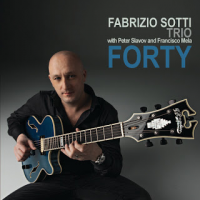 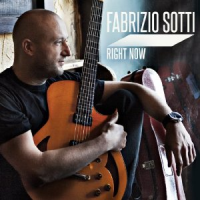 This World Upside Down

Kindness In Your Eyes

From: Inner Dance
By Fabrizio Sotti

All About Jazz musician pages are maintained by musicians, publicists and trusted members like you. Interested? Tell us why you would like to improve the Fabrizio Sotti musician page.