Guitarist/composer, was born on the 11th of February 1977 in Palermo, Sicily. At the early age of 4, he showed a strong attraction for the arts. At the age of 16, he began his studies at the High School of Art, E. Catalano, in Palermo and within the year, learned to play the electric guitar on his own. Not long after, he began performing at several clubs in Palermo and throughout Sicily.  In late 1996, he continued his studies at the Fine Arts Academy in Palermo, achieving a Bachelor’s Degree in Sculpture in 2001. After his graduation, he decided to embark on a new life in Turin, where he followed a 3-month jazz course at the Centro Jazz with the guitar teacher, Pietro Ballestrero. After few years, he aspired towards developing a deeper knowledge and relationship with Jazz. He took a chance; he applied and was accepted into the Prins Claus Conservatoire in Groningen, The Netherlands. In doing so, he had the opportunity to study with European guitarists such as Anton Goudsmit and Frank Wingold. He also followed regular lessons with great musicians out of New York such as Conrad Herwig, David Berkman, Brian Lynch, Ralph Peterson Jr. and among many others. Throughout these years, he led the Klee Quartet, a contemporary jazz band playing his very own compositions and arrangements. With Klee, he participated in festivals and events in the Netherlands and Italy. Within the Netherlands: Midnight Express Jazz Festival (2005 and 2006) in Groningen;.the Trytone in Amsterdam; the Vini In Jazz Festival in Agrigento. In Palermo, Sicily: Cinisi Tonnara Nuove Musiche Jazz Festival, 2005 and 2006, and in 2007, he led the Onda d'Urto Ensemble, an extension of the Klee Quartet in which he introduced his own compositions and Wayne Shorter's composition of Ana Maria with new arrangements for nonet . Fabrizio also took part in other musical collaborations, such as the Owen Hart Jr. Quartet on 29 August 2006: Aquarius Jazz Night, Guardiola di Piraino (Italy), in 2007, the Tarek Yamani & Camel Shop Sextet in Groningen, the Genco Quartet in Agrigento and the Bitches Brew Project led by the Dutch pianist, Joost Swart (Midnight Express Jazz Festival). In 2008 He partecipates to the Beatlesymphony, project of the Symphonic Orchestra of the Music Academy in Palermo. He joins a new quartet of the saxophone player Stefano D'Anna (Spazio Jazz a Palazzo Jung- Festival Festa della Provincia, 2008, Palermo).

In 2008/9 He teaches jazz, rock, fusion at the Modern Music Academy (AMM) in Palermo; He's also a member of Manziluna, band presenting original compositions based on a mix of jazz, mediterranean melodies and total improvisation. They partecipate to the Vininjazz Feastival in Santa Margherita del Belice, Agrigento (Sicily). On July 2009 in Tuscia (VT) he studies with the jazz guitarist-composer Kurt Rosenwinkel. Since 2010/11 He continues his own carrer teaching guitar at the Palermo Jazz school and playing around Sicily and abroad, in the Netherlands; he plays with Marcello Pellitteri, Alberto and Loris Amato (Amato Jazz Trio), Seby Burgio, Pietro Ciancaglini, Michael Rosen, Giuseppe Milici, Dario Carnovale, Mauro Schiavone. Since 2010 he's member of the Macchina di Suoni Orchestra by Marvi La Spina and also member of the Flow Trio, with Dario Carnovale and Gabrio Bevilacqua, wich presents a jazz standard repertoire and original compositions. On February 2011 it comes out the debut cd of the "Manziluna" band, and in the same month recods the demo of new band "Flow Quartet" with Mauro Schiavone, Gabrio Bevilacqua and Fabrizio Giambanco. After his graduation in Groningen he won a Scholarship to live 3 months (march-may 2011) in New York where he took lessons with Ben Monder, Lage Lund, Jonathan Kreisberg and Gilad Hekselman. 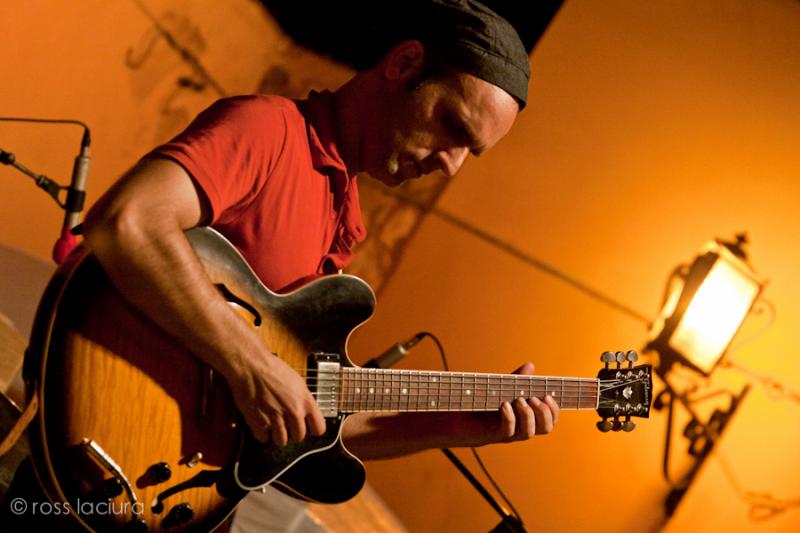 All About Jazz musician pages are maintained by musicians, publicists and trusted members like you. Interested? Tell us why you would like to improve the Fabrizio Brusca musician page.