Eliot Lewis, independent artist and multi-instrumentalist, has been performing sold out shows all over the world and is currently a member of the legendary duo, Daryl Hall & John Oates.

He has also performed on some of the most prestigious stages in the world including the legendary Hollywood Bowl, Japan's Budokan Arena as well as performing on The Voice, Conan O'Brien, Today Show, Jimmy Kimmel and many others.

Eliot has also been blazing his own trail all along as a highly prolific solo artist.

Performing all over the country with his unique “one-man” band show that incorporates all of the instruments he plays.

Having mastered five instruments over the course of his distinguished career, Eliot has written, performed and produced several solo albums including his latest “Enjoy The Ride.” A serving of guitar-focused classic rock&soul. Selling thousands of CDs independently, he has truly become a self-contained artist.

Earlier in his career, Eliot was signed to Warner Brothers, Sony Tunes, BMG and RCA as a songwriter and producer.

He also performed on hits including Tina Turner’s “The Best”. His own “Get Back What You Give” also won him a John Lennon Songwriting Award. He spent several years as a key member of the “The Average White Band”. Eliot toured, wrote and also produced several songs for the scottish soul band. Show less 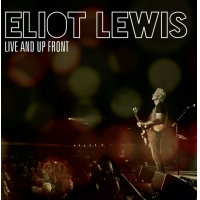 Live and Up Front

All About Jazz musician pages are maintained by musicians, publicists and trusted members like you. Interested? Tell us why you would like to improve the Eliot Lewis musician page.