Trained as a well-rounded percussionist in the orchestra, as a jazz musician on the bandstand, and as an artist under the tutelage of great teachers like Joe Morello (Dave Brubeck) and Dave King (The Bad Plus), David Whitman brings a passion and deep respect for the music to the stage wherever and whenever he performs. Praised for his versatility, he possesses a high level of skill across a broad range of percussion styles and ensemble situations.

David’s first album as leader ("Oh, Clara!") has recently been released on the North Park label. He is the principal percussionist with the San Diego City Ballet Orchestra, an active member of the American Federation of Musicians, and recently completed a performance tour and teaching residency in Japan. He is also a member of the International Academy of Performing Arts and Sciences and adjudicator for the European-based ENKOR competitions. David Whitman lives in Southern California with his wife, Nobuko, and daughter, Clara. 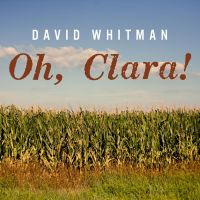 All About Jazz musician pages are maintained by musicians, publicists and trusted members like you. Interested? Tell us why you would like to improve the David Whitman musician page.