Born in 1991 and raised in Israel, Danielle began learning classical music at the age of 6, and very soon started simultaneously exploring the world of popular music.

Her fascination and love for improvisation led her to the world of jazz.

In 2010 Danielle started her studies at The Israeli conservatory (CJS) in a collaborative program with The New School for Jazz and Contemporary Music, where she studied with Israel’s finest musicians and educators.

During those years Danielle have experienced and worked with many ensembles, ranging in style and size - from small ensembles to big band, while working on her own music. She played in various venues around the country - from jazz clubs (Levontin 7, Shablul, The Yellow Submarine, Ha'ezor), to festivals (Layla Lavan, Festival Carmi'el) and special events.

After receiving a full scholarship to The New School for Jazz and Contemporary Music, she relocated to New York City during the summer of 2014. In the course of her time at The New School she learned and studied with notable teachers and musicians. In May 2016 Danielle received her Bachelor's of Fine Arts (BFA) degree with honors from The New School.

While Danielle continued to compose and perform around New York with her group Danielle Friedman Trio, she started an on-going collaboration with the distinctive disciplines of visuals and dance, to explore the ways of communicating through and with different artistic languages.

D&DF&P is free improvisation duo of piano and Dance with dancer Doron Perk. The Duo has performed in multidisciplinary events around NYC, and produced their full length debut evening at Dixon Place NYC, May 2017. In December 2017, D&DF&P performed in Tel Aviv, Jerusalem and Haifa (Israel), as well as taught masterclasses in both The Jerusalem Academy of Music and Dance, and The studio Theater in Haifa.

In July 2017, Danielle Friedman Trio has recorded their debut album in Riro Muzik Studios, Brooklyn, New York. The Album School of Fish was released independently on August 3rd, 2018 consequently after a short promotional tour in Switzerland and Italy during July 2018.

Currently, Danielle is residing in Berlin, Germany. She is working and playing throughout Europe with her own projects, as well as collaborating with different international groups and artists. 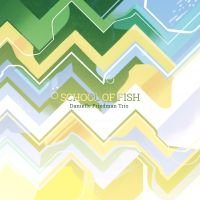 From: School of Fish
By Danielle Friedman 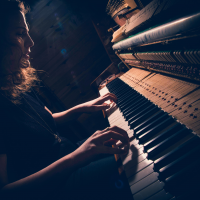 All About Jazz musician pages are maintained by musicians, publicists and trusted members like you. Interested? Tell us why you would like to improve the Danielle Friedman musician page.