In October 2012, vocalist Chelsea Reed brought five of her friends together to play some tunes in a South Philly dining room. Secretly, her plan was to form a band that played for swing dancers, so she could finally have the chance to sing her favorite songs for an audience that loved early jazz as much as she did. Since that fateful afternoon, those unsuspecting handsome men have comprised the Fair Weather Five: Noah Hocker on trumpet, Chris Oatts on saxophone, Jake Kelberman on guitar, Joe Plowman on bass, and Austin Wagner behind the drums.

Now, over a year later, Chelsea Reed and the Fair Weather Five are at home at swing dances, jazz clubs and concert halls alike. They have played renowned Philadelphia venues like the Kimmel Center and World Cafe Live in addition to touring around the country in a trusty blue van. They love exploring the roots of jazz and finding creative ways to interpret forgotten songs. Drawing upon the influence of artists such as Bessie Smith, Fats Waller, Louis Armstrong and Billie Holiday, Chelsea Reed and the Fair Weather Five bring the intensity and passion of early jazz to every stage they play to put on one heck of a show.

“She’s a true extrovert…even when you watch her sing, she engages you when she sings and makes you feel like you’re part of the story–which is very important.” Jazz trumpet player, Terell Stafford

“Chelsea Reed is my favorite kind of singer. She sings the songs as they are intended: beautifully, candidly, with excellent pitch and swagger and very few frills. The Fair Weather Five have the taste and good judgment to back her up without getting in her way, and to swing while they’re at it.” Singer/songwriter, Carsie Blanton 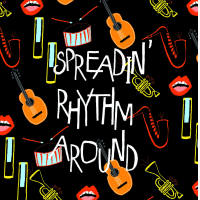 All About Jazz musician pages are maintained by musicians, publicists and trusted members like you. Interested? Tell us why you would like to improve the Chelsea Reed musician page.