Berardo “Chacho” Ramirez is bandleader, composer and drummer of his band “MetroTang” playing Latin Jazz with an Afro-beat. MetroTang opened the Narrowsburg JazzFest in May 2006 as its premiere performance. The recently released CD, “Lights Out,” presents original tunes plus one by Paquito d’Rivera and one by Bobby Martone. The CD is receiving accolades, as “Chacho has created a contemporary sound that expresses today’s cultural milieu” (Hal Galper).

Born in New York City in 1951 of Cuban and Puerto Rican background, Chacho began playing drums at the age of 12. His parents didn’t want to buy him a drum set, so he arranged grocery store boxes as a set around him; he had to replace boxes frequently. Later, with a drum set and living in apartments, Chacho was frequently chased from his rehearsal space down the block, sometimes with a broom. Nevertheless, he persevered through the years, studying intermittently with Ian Finkel (Xavier Cugat Band), Steve Barrios (Mongo Santamaria, Fort Apache Band), Freddie Waits (McCoy Tyner, Stevie Wonder, Marvin Gaye), and Pablo Rieppi (Professor, Columbia University, Hofstra University). Chacho also taught in workshops, drum clinics and Master Classes alongside Max Roach, Alan Dawson, Joe Morello, Bernard Purdie, and Jim Chapin.

Chacho is percussionist in Richie Vitale’s “Orquesta Universal” and is playing bongos, congas and Latin percussion on the CD In addition, Chacho plays percussion in Jorge Jimenez’s “Sabor a Conga,” performing regularly in Manhattan’s salsa venues.

As a teacher, Chacho works extensively as Artist in Residence throughout New York City for Young Audiences / New York. For four years, he was the bandleader/teacher of the Adlai Stevenson High School Latin Band. He wrote a Study Guide on the history of salsa music for use by public school teachers. Chacho also composed “Maracudu,” a percussion ensemble work commissioned and performed by the percussion ensemble of Hofstra University.

Chacho Ramirez and Metrotang's "Lights Out" CD Release Party at The...

From: Lights Out
By Chacho Ramirez
Last Updated: October 10, 2021 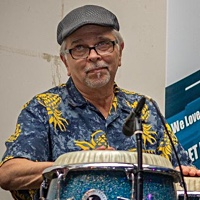 All About Jazz musician pages are maintained by musicians, publicists and trusted members like you. Interested? Tell us why you would like to improve the Chacho Ramirez musician page.