Brad Mason (trumpet) was born in England. When only 5 years old, he began trumpet lessons with his father, Barry. At 9, he began piano lessons and played both instruments at school and outside recitals. By 14, he was performing three to four times a week in dance halls, theaters, clubs, and pubs. Though his repertoire included a variety of musical styles, the young musician was drawn early to jazz and improvisation. At age 17, Brad won the national Daily Telegraph Young Jazz Soloist Award and was a featured performer at John Dankworth’s Wavendon Jazz School.
​ Later that year, Brad moved to the United States to study, on a full tuition scholarship, at the Berklee College of Music in Massachusetts where he met and studied with Hal Crook and Phil Wilson, among others. He won his second Daily Telegraph Young Jazz Soloist Under 25 Award in 1993, the same year his younger brother, Elliot, won the Under 21 category. Brad represented Berklee at performances throughout the United States, and in 1995 he traveled to Israel to perform at Dave Liebman’s annual I.A.S.J

. conference. He received the Clark Terry Award in recognition of outstanding performance abilities from Berklee College of Music in both 1994 and 1995. It was during these years at Berklee that Brad developed his interest in the electronic valve instrument (EVI) and he soon integrated it into his performances. After graduating from Berklee, Brad moved to New York City where he quickly became in demand as a trumpet and EVI player.
​ Mason performed at the 31st American Music Awards as a member of the band, Bombsquad, the recipients of the American Music Award for Best Unsigned Band of 2003.
In January 2007, Mason joined the John Mayer Band for a 2 1/2 year stint of recording and touring world wide. Soon after this in 2011 Brad became a faculty member at NorthWestern University in Chicago as their Jazz Trumpet Professor.
He started working with Diana Ross as her lead trumpet in the summer of 2013 and then joined Blood Sweat & Tears as a full time member in June 2015. He is currently their MD (Musical Director) and can be seen touring with them world wide. While freelancing & teaching in New York & Chicago, Mason continues to co- lead the Mason Brothers Quintet with his brother, Elliot.
​ Mason’s recent career includes performances with Blood Sweat & Tears, Jazz at Lincoln Center Orchestra w/Wynton Marsalis, Melissa Etheridge, Diana Ross, Vincent Herring, Carl Allen, Cyrus Chestnut, Randy Brecker, the Christian McBride Big Band, the Bernie Williams Band, John Mayer, Eric Clapton, Buddy Guy, Jessica Simpson, Alicia Keys, Natalie Cole, Caro Emerald, Willie Nelson, the Isley Brothers, Mike Stern, John Scofield, Gary Burton, Antonio Sanchez, Dave Binney, Mingus Big Band, Chico O’Farrel’s Latin Jazz Band, Joe Zawinul, Gary Husband, Lionel Loueke, Lionel Hampton, Bill Pierce, Hiram Bullock, Claudio Roditi, Dave Liebman, Ronny Jordan, Abe Laboriel, and Lenny White.

• Won the Trumpet soloist award in the Daily Telegraph’s National Jazz competition at age 17. (1991)
• Won the Daily Telegraph’s National Jazz Award for the second time with Elliot. (1993)
• Winner of the Outstanding Activity and Achievement Award from Berklee College of Music. (1993)
• Winner of the Clark Terry Award in recognition of outstanding perfomance abilities from Berklee College of Music. (1994 & 1995)
• Won an American Music Award with the “BombSquad”. (2003) 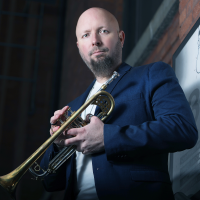 All About Jazz musician pages are maintained by musicians, publicists and trusted members like you. Interested? Tell us why you would like to improve the Brad Mason musician page.