Bob Henschen is one of Houston's finest jazz pianists. He played in the famed University of North Texas One O' Clock Lab Band in the 1960's and toured with the Buddy Rich Big Band in the 1970's.

Returning to Houston, he has backed up some of the best names in jazz, including Dizzy Gillespie, Freddie Hubbard, Joe Williams, Anita O' Day, Billy Harper, Carlos Garnett and Eddie Harris, as well as Houston greats, Arnett Cobb, Don Wilkerson, Jimmy Ford, Tex Allen, Tony Campise, Roseanna Vitro, Horace Grigsby and Mickey Moseley. In 1998, he performed in Switzerland at the Ascona Jazz Festival with vocalist Jewel Brown. He has also appeared at the Corpus Christi Jazz Festival and Trinity Church Jazz Festival, and at the Kemah Boardwalk Jazz Fest, where he was the recipient of the 2009 Kemah Boardwalk Jazz Achievement Award.

He plays regularly at Houston’s best jazz venues, including Cezanne’s, where he was Artistic Director from 2000-2003. He has taught in the jazz studies programs at the Houston High School for the Performing and Visual Arts, Houston Community College and Texas Southern University.

"Stunning is Henschen's spacious take on Jack DeJohnette's plush ballad, 'Lydia' . . . Henschen's golden touch resides in his delicate confidence . . . Henschen captures a steady swing that permeates the soul of the recording: light and classy and always on the beat."

—C. Michael Bailey, All About Jazz 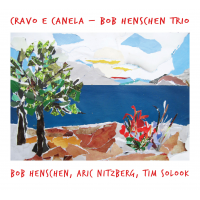 All About Jazz musician pages are maintained by musicians, publicists and trusted members like you. Interested? Tell us why you would like to improve the Bob Henschen musician page.