Retired music teacher, Bill Cash is a North Country native, born and raised in Plattsburgh, New York. He received a BA in music from Plattsburgh State then his MM in music from Crane School of music. His major instrument was trumpet and performed professionally for three seasons with the New Hampshire Symphony, before becoming a full time instrumental music teacher. For thirty-three years, he taught high school instrumental music, twenty - seven of them in Catskill NY.

In 2006 while teaching jazz band, he was inspired by a fantastic high school guitar player who played solo jazz. Falling in love with the sound of solo jazz guitar, he actively began pursuing its study. As a result, in 2009 he starting performing solo guitar for the public.

As a fan of the Great American song books, his listeners will find many references to artist of that time period: Nat King Cole, Billy Holiday, Frank Sinatra, Lena Horne, Ray Charles and many more. Interestingly, listeners will also find some country music, folk tunes as well as iconic artist, such as the Beatles. The arrangements are unique, however, since they have been re - score using a jazz harmonic structure. 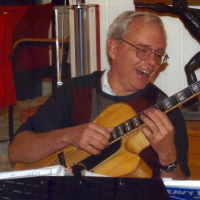 All About Jazz musician pages are maintained by musicians, publicists and trusted members like you. Interested? Tell us why you would like to improve the Bill Cash musician page.