Ben Mizrach is a Jazz Alto Saxophonist, composer, bandleader and multi-instrumentalist. He is based in New York but currently studies in Boston. He's studied with some of the best jazz players in New York / Boston, including Donny McCaslin, Jerry Bergonzi, Brian Levy, Cecil McBee, and Henrique Eisenmann.

Ben Mizrach began playing saxophone at the age of 9. After studying saxophone through middle school he switched to bassoon to play in orchestra, and still continued to play saxophone in jazz settings throughout high school and camps at Mason Gross Institute for the Performing arts and Montclair State. He enrolled in the Tufts University / New England Conservatory dual degree program in Spring of 2019, studying Physics and Jazz Saxophone, respectively.
​
Ben Mizrach has played numerous locations in the New York and Boston area including Dizzy's Club Coca-Cola, Rockwood Music Hall, Pianos, Montclair Jazz Festival,The Cantab Lounge, and Aeronaut Brewery to name a few. On January 4th he will return to Rockwood Music Hall with his newest jazz project, debuting original jazz compositions from some of the best young musicians in Boston. He'll be debuting original jazz big band music with the Tufts Jazz Orchestra at Scullers Jazz Club this spring 2020.

Valentine's Day At The Saxy Lounge 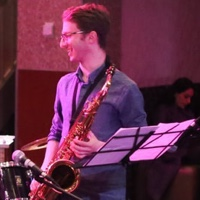 All About Jazz musician pages are maintained by musicians, publicists and trusted members like you. Interested? Tell us why you would like to improve the Benjamin Mizrach musician page.