Barbara Jungfer, born in Berlin West, fell in love with the guitar at age 11. Studying the acoustic instrument first with local music school teacher Wolfgang Lewerenz, she soon taught herself how to accompany Beatles-Songs with chords, which led her teacher to show her fingerpicking-arrangements of these tunes and later on Ragtime- and Blues-Arrangements. Becoming familiar with the Blues, she chose the electric guitar as her instrument at age 16 and imitated Blues guitarists like B.B. King and Albert King. Not much later, she discovered Jazz and Jazz Rock, and mostly inspired by live concerts in Berlin in the late 80ies, began to study this kind of music by any means available” recordings, books, single lessons with local musicians, jamming with other guitarists, jazz band workshops and last not least sitting in in countless jam sessions. She gained even more playing experience in various Jazz Bands in West Berlin, ranging from Duo with saxophonist Tina Wrase over a Fusion Quartet playing 80ies Jazz Rock to the Flintstones BigBand playing Count Basie Swing. Her personal influences derive from a variety of styles and players, among them Jim Hall as well as B.B. King and Jimi Hendrix, up to John Scofield, Mike Stern and Mick Goodrick.

Being accepted at the renowned jazz department of the Musikhochschule Köln (Cologne) in 1992, she soon started to lead her own groups, mostly small ensembles that gave the guitar enough room to unfold. At the same time and over the years, Barbara has developped her skills as a composer, her tunes often characterized by memorable melodic lines colored by modern harmonies, still spiced here and there with a good spoonful of Blues. She attended the Siena Jazz Seminar/Italy in 1996 and the Banff Centre For The Arts Jazzworkshop/Canada in 1998.

With all these experiences and influences and a diploma in jazz guitar, she moved back to Berlin in 1998. That same year she founded her Hammond Organ Trio „Vitamin B3“, of which the debut-CD was released in 2001 (yvp-music). In 2004, she won the studio contest by the Berliner Senat with an experimental duo (with tuba player Pauline Boeykens) interpreting the writings of Gertrude Stein. In 2005, her second CD, a quintet setting featuring pianist Anke Helfrich called „Berlin Spirits“, was released in cooperation with the RBB (Radio Berlin-Brandenburg) and the label minor music . Due to that release she got invited by the German Goethe Institut to the international „Festival Des Instruments A Cordes“ in Rabat/Marokko. In 2006, she won a grant by the Berliner senat for a composer’s residence in New York.

Not willing to bend her ideas to commercial needs of some bigger labels, her third CD, „Going Places“ , a quartett project with Florian Trübsbach-sax, Scott White/Henning Sieverts- bass, Christoph Schlemmer/Guido May-dr, was released in 2008 by the Berlin Indie-Label phonector.

She got invited to play a three-week-tour over all India by and with Auroville-based violinist Holger Jetter in 2009, including concerts at Indigo Jazz & Blues Festival Bangalore and Congo Square Jazzfest Kolkatta.

Other musicians she has played with are a.o. Helmut Brandt, NDR Pops Orchestra, Berlin BigBand and Klaus Doldinger’s Passport. Barbara has also been working for the Saarländisches Staatstheater/Saarbruck (1998) and the Munich based theatre group Tollhaus Compagnia (2011) Show less

„ This music has weight, convincing power and excitement. The boredom of flat landscapes won't be found here. She conjures up chord changes that are as unexpected as the effortlessness and certainty with which she plays them.” (Alexander Schmitz/Jazzpodium09/2005) 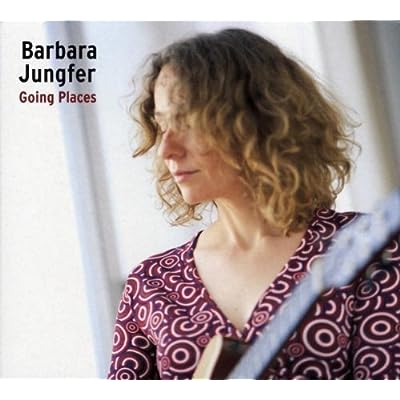 All About Jazz musician pages are maintained by musicians, publicists and trusted members like you. Interested? Tell us why you would like to improve the Barbara Jungfer musician page.