Primarily recognized as Louis Armstrong’s bassist, Arvell Shaw must have been one of the last musicians to learn to play his instrument on the famed Mississippi riverboats. Taught trombone and tuba in high school, in his native St. Louis, he took up the double bass in 1942 while playing with the legendary Fate Marable, a bandleader who spent his life working on the paddle steamers. The omens were already good for Shaw, because Miles Davis, Clark Terry and Ernie Wilkins had also been in the high school band in St Louis. It was Terry who persuaded him to switch to bass.

Leaving Marable to join the US Navy, Shaw played in several military bands throughout the Second World War (Clark Terry was in the first of them) Louis Armstrong took the young man into his big band when he left the navy.

By the time Shaw left Armstrong for the first time in 1953 (he worked for the trumpeter off and on until Armstrong's death in 1971) he had become a virtuoso bassist, so good that Armstrong allowed him to take solos several times as long as those usually given to the instrument by other leaders.

Armstrong had broken up his big band in 1949 when he realized that he could make more money with a seven-piece all-star band than with the 16-piece one. Shaw, now out of a job, stayed in New York and worked with some of the modern musicians, including Art Blakey.

Late in the year Armstrong called him back and he joined the All Stars on tour in Los Angeles. And there he stayed for most of the next 20 years, managing to fit in tours with Jazz at the Philharmonic and the Teddy Wilson trio in between.

But as a young man he was wild. “He was just a happy-go- lucky fellow, and we did our best to keep him straight,” was how Earl Hines, Armstrong's pianist, remembered Shaw. “Arvell was just a kid when he joined us,” said the clarinetist Barney Bigard.

In 1951 he took leave of absence to study harmony and composition in Geneva. When he returned from his studies, he was a much more accomplished bass player. He joined Benny Goodman's band for the European tour of 1958 when it appeared at the World's Fair in Brussels and took a job as one of the first black musicians to work in the New York studios, but soon found the work oppressive and returned to Armstrong a year later. He was with Armstrong on the trumpeter's last gig at the Waldorf Astoria in New York, and when Armstrong died Shaw stayed in the city, working in pit bands on Broadway. He worked in the jazz- slanted musicals “Bubbling Brown Sugar and Ain't Misbehavin'” amongst others.

He toured Britain in a package led by the British trumpeter Keith Smith, “The Wonderful World of Louis Armstrong”, in 1981-82 and that same year played and recorded with Lionel Hampton. His sight deteriorated so that he was almost blind, although his partner Cynthia Moten managed to conceal the fact by guiding him everywhere. With her help he was able to play at festivals all over the world. He last played at the Ascona Festival in Switzerland in July 2002, passing in December of that year. Show less 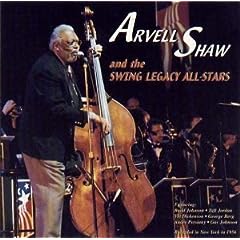 All About Jazz musician pages are maintained by musicians, publicists and trusted members like you. Interested? Tell us why you would like to improve the Arvell Shaw musician page.