His current projects include his piano trio with bassist Michael Bates and drummer Owen Howard and their recently released debut album “Quiet as a Bone” on HRL Records, and an avant-chamber group, “Rare as Radium” with violinist Sam Bardfeld, bassoonist Sara Schoenbeck, and saxophonist Catherine Sikora.

This year also marks Art’s debut as a producer for vocalist Wren Marie Harrington’s soon to be released “Light Travels”, on which he was also a performer and arranger.

Art also loves to teach, with many happy and talented piano and accordion students on his roster. 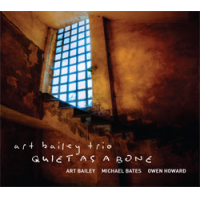 Quiet As A Bone

All About Jazz musician pages are maintained by musicians, publicists and trusted members like you. Interested? Tell us why you would like to improve the Art Bailey musician page.